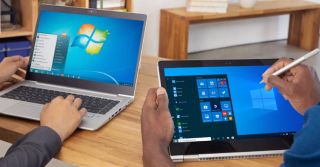 Today, January 14th, marks a difficult day for both schools and Microsoft. After a long run, it’s the beginning of the end for Windows 7 with the company no longer promising free security updates for the venerable operating system. With roughly one in four computers still using Win 7 – and at least as many in schools – what is there to do?

Windows 7 debuted in the fall of 2009 and quickly became the operating system of choice at home, work and school. Fast forward a little more than a decade and its end of life should come as no surprise to anyone other than a hermit living in a cave. That’s because Microsoft has been telling the world that Windows 7’s days were numbered for years. It stopped adding new features to the software years ago and has only been updating critical security flaws for the last year. Starting tomorrow, it won’t even do that anymore.

It’s not as if these computers will stop working tomorrow, but after Windows 7’s retirement party is over and the cake is gone, these computers will become more and more vulnerable every day. Security flaws and backdoors won’t be patched as they are revealed, and you’ll be on your own as far as operating system security goes.

How do you deal with this huge change in the computing landscape? There are three main alternatives to consider, but none of them seem to be particularly appealing. Here are your options.

1. Get a different operating system

The most obvious solution is to use this as an opportunity to leave Win 7 behind by changing to Windows 10, macOS or Linux software. Likely, most of the machines at your school will be compatible but it will take time, money and effort to make the move.

Expect some disappointment and the potential for a rough transition with some software needing to be left behind. Microsoft’s Desktop App Assure program can help this transition for schools or districts with more than 150 PCs.

Several consumer and business security companies plan to continue to provide Win 7 support for at least a year. If you get their malware protection, it will help keep the systems clean but there’s nothing a hacker likes more than an unsupported computer with security weaknesses. While the protection won’t be airtight, it will be better than a naked machine and provide the time needed to formulate a plan to create a more secure future for your school’s computers. On the other hand, all it does is delay the inevitable action of moving to a more modern and secure operating system.

Microsoft has a site dedicated to smoothing the move away from Windows 7, but it focuses on getting new Windows 10 computers. This is a luxury that many schools cannot afford, even with the company’s buy-back program, which trades old computers for credit to buy new ones. There is another way: Microsoft may be ending its free security program for Windows 7, but it will be offering extended security coverage of Win 7 systems with security patches and updates for a price. This service used to be for its big enterprise customers, but Microsoft has opened it up to small and medium businesses, including schools. Called Extended Security Updates (or ESUs), Microsoft promises three years of paid security support, but it won’t be cheap. The costs will vary but for many it will escalate from $50 for the first year to $100 for the second year and $200 for the third (and last) year of security support. In other words, it’ll likely be cheaper to give up the ghost and move to a more modern and secure operating system than to limp along with Win 7.

My warning is that if you try to muddle through this computing sea change without making any changes, it will likely not end well. That’s because hackers and ransomware purveyors are looking exactly for this sort of opening and have been targeting municipal governments and school systems of late.

All it will take to bring down a network of school computers is clicking on the wrong email or downloading the wrong file. At that point, “puff”, the entire school’s computers and all their data can be compromised.

Windows 7 may not be in the rear-view mirror quite yet but there is a lot you can do to keep your school’s computers safe and secure. It’s the best example I can think of where being proactive is the only way to survive.