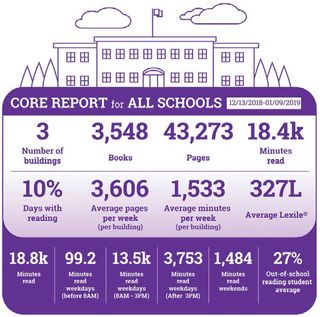 Guadalupe Union School District is tucked into the northwestern corner of Santa Barbara County, just a few miles from the California coast. The district was ranked the lowest-performing in the county when Superintendent Dr. Emilio Handall came on board. Recent projects to strengthen educational services include state-funded facilities improvements and a 1:1 tablet initiative for junior high students.

To further encourage students and families to read together at home over winter break, the district launched the Gift of Literacy program, a new offering of digital books and news articles built around Renaissance myON Reader and Renaissance myON News, powered by News-O-Matic. Guadalupe’s Assistant Superintendent of Curriculum and Instruction Gina Branum explains, “We wanted a hook, using programs that make reading so engaging that students would rather read than watch movies or play video games.”

According to Branum, the results were immediate. “On the Wednesday before holiday break, students signed into their individual myON accounts for the first time. By early dismissal on Friday, they had logged 3,239 minutes reading. But more encouraging was that they continued reading over the weekend. From that Friday afternoon to 9:15 the following Monday morning, they read another 1,293 minutes and raised average Lexile scores by three points.”

Handall states, “We know that the more students read, the more they learn and achieve. We want everyone—staff, parents, guardians, and the surrounding communities at large—to encourage our children to read at school, at home, over break, and every day.”

Learning Ally has announced the winners of the 2019 Great Reading Games, adding the latest chapter to an inspiring story. The New Jersey-based educational solutions organization, whose mission is to empower students with learning differences to succeed in the classroom and beyond, initiated the Great Reading Games four years ago as a way to motivate and engage struggling readers, and has seen it grow in size and scope every year since.

“The Great Reading Games is a fun, competitive way to promote reading nationwide,” says Terrie Noland, VP of Educator Initiatives at Learning Ally. “This event gets everybody going, especially struggling readers. Our data shows that students who participate read twice as much and three times as often.”

The goal of the event is to get students reading with frequency, which Learning Ally defines as reading for twenty minutes a day for thirty-three days, a critical tipping point shown to lead to improved academic and social-emotional outcomes. This year, more than 37,000 students from 1,600 schools competed in the Great Reading Games, and they read a record-breaking 12 million pages during the seven-week event. Top student performers win Chromebooks, headphones, and gift cards. Teachers win prizes and recognition for their schools.

The New Jersey North Bergen School District, which has a 90 percent minority student body, mostly Hispanic, is challenged with improving its current 42 percent reading proficiency rating. To tackle this problem, Lincoln Elementary School adopted MindPlay Virtual Reading Coach (MVRC), from MindPlay. “At only pennies per-day per-student and very easy to use, it appeared to be the most cost-efficient and effective way to implement research-based instruction for our struggling readers,” says Gladys Vazquez, Dyslexia therapist and teacher.

Vazquez thanks the MindPlay Professional Development Team for their “extremely valuable introductory training session.” This session included a demonstration with actual Lincoln School student data along with an interpretation of the numerous reports produced through MindPlay. “Being able to see growth when the program is used with fidelity helped our staff gain a better appreciation of the value of this product for administrators, teachers and students,” she says.

Amy Boles is Director of Educational Services for Oak Grove School District (OGSD), where over 70% of students are Latino, Asian, or Pacific Islander and nearly one quarter are English Learners.

“Our students reflect a great diversity of backgrounds and needs. We’re always working to understand what they’ve come in with and where they can go next,” she says.

Amid economic disparities, budget pressures, and decreasing enrollments, OGSD is striving to invest wisely and fulfill its mission of equipping every child to achieve their maximum potential.

They chose i‑Ready, citing its ability to pinpoint students’ placement across domains and then build out an appropriate learning progression, its coverage of K–8, and its overall ease of use.

The goal during OGSD’s multi-year implementation has been getting solid data and helping teachers to use that data to inform instruction.