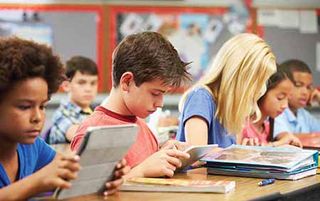 Whether you’re in a 1:1, BYOD, or combo program, or somewhere on the continuum, mobile device management (MDM) software can be a CIO’s best friend. These days, there may be as many MDM packages as there are types of devices. So we’ve asked your colleagues to weigh in on how they handle their ever-growing assortment of tablets, laptops, and smartphones.

Like many districts before it, Beaverton (OR) School District wanted to find the best way to get devices into students’ hands so they can collaborate, access resources, and reap the benefits of a digital world. To be sustainable, the district chose to be device-agnostic. Today they have 21,700 devices in use, including 13,000 Mac desktops and laptops, 4,000 Windows computers and devices, 2,500 iOS devices, and 2,200 Chromebooks. Because they had the Macs for a while and used JAMF software to handle those computers, it was only natural to use Casper Suite to manage iOS devices as well. “With changes happening in instruction and changes coming from vendors like Apple, we’ve been forced to rethink our philosophy on what we manage,” says Andrew Stenehjem, manager of user services. “We’re looking for tools in MDM that allow our users to be self-reliant so that IT is not a bottleneck.”

A high school film student in the Beaverton School District records an elementary student showing how she uses the iPad to create things. Since Beaverton isn’t a completely 1:1 program yet, Stenehjem can’t take full advantage of Apple’s new system for setting up and deploying iPads. This is where the Casper tools shine. A few weeks ago, the district changed its wireless name and password. If they had not been using an MDM solution, all 2,500 iPad users would have had to have to type in the new information to connect. Instead, Stenehjem made the change from his computer in 30 seconds and sent it to all the iPads. “Obviously, that’s a huge value add,” he says. As for apps, he’s happy to use the product’s self-service tool. “We can put items we buy in self-service and users go into self-service and install the app. The Casper Suite also has a tool called Casper Focus that is geared toward educational use. It lets teachers lock their students on one app and then release them, one at a time, when they are ready. Teachers can keep an eye on their students’ battery power or send work to Apple TV for sharing and collaboration.”

Stenehjem admits that IT has traditionally forced teachers to wait for the apps and resources they request. “We want to give some of that control to the school or the teacher without increasing their workload. Casper will let us do that. Being able to delegate is huge.”

Students in Mooresville Graded School District work on a group project. Dr. Scott S. Smith, chief technology officer of the Mooresville (NC) Graded School District, is no stranger to MDM. Currently in its seventh year of a digital conversion, Mooresville students have had MacBooks since 2007. “In our first year, we had laptops at one high school and one intermediate school with no management solution, and that bit me you-know-where,” says Smith. “When we needed to install software, we had to run around and touch every one of our 2,500 devices.”

In the second year, when they were up to 4,000 machines, Smith heard about FileWave from someone at Apple. He did a trial over the summer and put the client on every machine; when he decided to go forward and buy it, the solution was already in place. Within the first two weeks of the school year, there was a filtering problem that required Smith to change every machine. Thanks to FileWave, he did it with the click of a button. “In one mistake, it paid for itself,” says Smith.

By the next year, he had FileWave on every machine and has used it ever since. Smith loves that it’s cross-platform because the district now has iOS devices, PCs, and so on. “The FileWave client on each machine checks in with my FileWave server every three to five minutes or so for updates and does them automatically. I can see all my devices, upgrade software, and just push them out. It happens in the background and the end user never knows.”

Another thing Smith likes is that FileWave lets students install and uninstall apps as they need them through a self-service kiosk on their device’s toolbar. He controls what they see—based on their school and/or grade level—but they can install software when needed, such as a QR reader for a month-long project, and he doesn’t have to get in the way. “Basically, it makes our lives easier and management more efficient.”

Elementary students and physical education teachers at Coachella Valley USD use their iPads throughout the day. Coachella Valley (CA) USD, which President Obama praised for its 1:1 iPad program during his White House ConnectED Conference in November, has used AirWatch for MDM for about three years. “We did a small iPad pilot with administrators in 2011 without any MDM solution, but as soon as we went to a 5,600-iPad pilot we started looking for the right solution,” says Israel Oliveros, mobile technology coordinator. “AirWatch fit the bill.”

Science is even more engaging at Ventura USD, thanks to mobile devices. Today, the high-poverty, predominantly migrant district is completely 1:1, with more than 20,000 iPads for teachers and students in grades preK-12. Oliveros used Active Directory to create accounts and email addresses for each student, all of which tied into organizational groups in Active Directory. “It’s called user mapping. Each student logs into the network and gets access to the right materials, based on his or her unique ID.”

In the past, Apple’s volume-purchasing program let districts purchase 20 or more app licenses for a discount. However, Oliveros says he needed to treat each app as a consumable. Now, with Apple’s new managed licensing plan, the district retains ownership of the license. “Any user in our MDM gets a managed licensing account, so a school can use an app for three weeks and then we pull it back and issue it to someone else. It’s more of a one-time purchase, perpetual license than an ongoing cost.” He has given AirWatch administration privileges to two people at each school, and they handle their school’s requests. “It makes it easy for the users to have a good experience.”

In the one-and-a-half years that Julie Judd has been chief technology officer for Ventura (CA) Unified School District, the district has bought close to 6,000 devices, including iPads that went to six elementary schools as part of a grant program.

Judd’s team tested a few MDM products and chose Lightspeed Mobile Manager. Ventura is a long-time Lightspeed customer, so integration was easy, although Judd’s lead technician had to learn how to handle Apple IDs and the purchasing process. “We trained a lead teacher at the elementary school and he is training other teachers how to use Mobile Manager to load and manage apps for their classroom sets,” says Judd. “We’re fully functional at the six elementary schools that are part of the grant. Now we have to expand to the rest of the schools that have iPads.”

She and her team appreciate that Mobile Manager lets them take advantage of Apple’s volume-purchasing program. “When you’re evaluating solutions, make sure it will let you set up a process with a hierarchy of permissions to allow teachers autonomy while maintaining the rules,” says Judd. She’s also pleased that it lets them handle upgrades and other formerly time-intensive tasks.

“MDM solutions can allow teachers to get software to their students without having to figure out the logistics. If you have a good tech department involved in the process, your teachers can focus on teaching.”

Tools They Use Beaverton (OR) School District