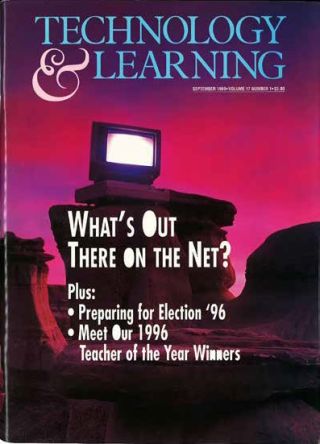 Educators have always wanted to go beyond the classroom walls and connect with people and information in faraway places. But it took legislation to get us there. Today, thanks to E-Rate funds and easy access to the Web, one can choose among various forms of online and blended learning and even virtual schools.

The early days of the Internet provided rudimentary tools. In 1993, Tech & Learning (T&L) ran an article called “Making Connections with Telecommunications.” This article noted that, “Students and teachers nationwide are using local bulletin board systems, commercial services, and education networks to communicate with peers, conduct sophisticated research, and solve problems of a global nature.”

Just two years later, the Web had emerged and T&L went online with techlearning.com. T&L also featured the Web in a cover story, “Surfing the Web,” and started a regular column called “The Online Connection.” Gil Dyrli’s first column, “Plunging into Cyberspace,” dealt with “content area indexes waiting for you on the Net.” He talked about being “on the World Wide Web” but also provided sites you could search with just text-based Internet services.

In October 1995, T&L provided a comprehensive guide to the Web with information on connecting, using browsers, curriculum resources, making sense of URLs, dissecting a Web page, online hot spots, and implications for schools. It ended with the following words: “The World Wide Web has the potential to change the nature of teaching and learning significantly. It’s time to get out on the Web and blaze new education trails to tomorrow.”

More schools found funds to take the plunge, but it was slow going. Wiring, contracts with Internet service providers, and equipment were all costly. In 1996, E-Rate passed as part of the Telecommunications Act and this, with its call for universal service, made all the difference. The act included two measures specifically for schools and libraries so they could purchase Internet access at a discount.

In the same year, the US Department of Education published its first long-range technology plan with four goals:

■ All teachers will have the training and support to help students learn using computers and the information superhighway.

■ All teachers and students will have modern multimedia computers in their classrooms.

■ Every classroom will be connected to the information superhighway.

■ Effective software and online learning resources will be an integral part of every school’s curriculum.

Bandwidth—the speed at which information is able to travel from its source to your computer—became the defining issue for access. The cable industry and telephone companies vied for dominance. And communities organized “NetDays” to wire schools for access to the Internet.

T&L’s “What Works” column pointed out that teachers joined online projects to encourage students to learn about current affairs, experience global communications, understand world cultures, and more. An article titled “On the (Virtual) Campaign Trail” showed how “With help from today’s technology, every student can debate the issues with faraway peers and politicians, gain a better understanding of the complex American electoral process, and take part in simulated elections.”

T&L provided words of caution too. In “Exploring the Internet Safely” we said, “The Internet, like an uncharted wilderness, promises vast resources and the space to create new communities. But now, parents and teachers are wondering whether lurking dangers outweigh potential benefits.” The article covered strategies for safe exploration, filtering software, Acceptable Use Policies, server solutions, safe-surf products, online watchdogs and guidance, and more.

Web use took off.

Starting in 1998, techlearning.com included a regular feature called “Web Sightings” that highlighted the best of the Web in different content areas. Educators submitted their favorite sites for their peers to visit.

By 2000, many schools and districts wanted their own Web sites. So in August of that year T&L’s features included “Building a Content-rich School Web Page,” “Ten Tips for a Great School Site,” “The Web Builder’s Toolbox,” and “Web Building Guidelines from Kid Experts.”

In February 2001, Judy Salpeter wrote a roundup of all the Internet search tools that people were using. She says, “At the last minute I decided to throw in this brand-new tool called Google to see how it compared.” Who knew?

By July 2003, digital content included myriad Web sites, databases, streaming video, videoconferencing, software, and interactive games. The challenge for classroom teachers was how to find, evaluate, and steer students to the most appropriate content.

WebQuests, which started in 1995, were popular in 2003. These inquiry oriented activities, in which most or all of the information was drawn from the Web, focused on using information rather than looking for it. Teachers created paths through information and encouraged learners to think at the levels of analysis, synthesis, and evaluation.

By 2005, it looked like students were much more facile with technology than their teachers. In September, T&L asked, “Are digital-age students fundamentally different from the rest of us?”

In March 2009, T&L presented the largely untold story of how online learning was unfolding in America’s brick-and-mortar classrooms. And in 2010 we explained how to use Bring Your Own Tech (BYOT). More learning started happening online, which led to today’s reliance on all things digital.

Put to the Test: A Desktop in Your Pocket

The End of the Road for Windows 7: Three Options for Safe School Computing