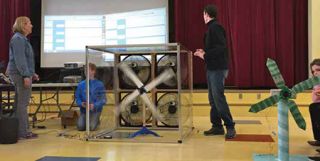 Have you ever wondered what happens to schools that win grants and are instant recipients of a roomful of tech? We have, too. For this story, we revisited a handful of schools we profiled in July 2013. We were curious to learn about the impact their newfound technology had on teaching and learning.

HANDS-ON ALL THE TIME

Engineering students test wind blade designs with Vernier sensors. In 2013, Kristy Schneider, a science, robotics, and electronics teacher at La Center Middle School in La Center, WA, received the Vernier/NSTA Technology Award and used the $5,000 to buy probes and other equipment for her sixth-grade students. “Since receiving the grant, I have continued to use the probeware and LabQuest 2 units,” says Schneider. “I also download the data to iPads so students can share their findings.” The LabQuests and probes enable her science classes to monitor a local stream in the wetlands next to the school. Students monitor dissolved oxygen, temperature, nitrates, phosphates, turbidity, and pH. They also take stream measurements and do some soil testing.

Since winning the grant, Schneider says the biggest change has been moving from paper-and-pencil data records to using high-tech probes that allow students to see their data graphed immediately. The downloaded data improves accessibility by allowing students to analyze each other’s data easily. “In the beginning, I thought it was going to be a hard transition for sixth graders, but they love the technology and learn quickly.”

“Our STEMsmart classrooms have transformed teaching and learning in our middle schools,” says Page Dettmann, executive director of middle schools at Sarasota County Schools. “We have grown so much.” Each classroom now houses six D-shaped tables. A 27-inch touchscreen monitor sits on the “straight edge” of the D, and the students roll their chairs around the curved part to collaborate on lessons and projects.

Math and science students work in teams that are re-formed every few weeks as they learn to communicate and work in a group. They collaborate to acquire information, solve problems, or evaluate a process.

“Students use the vocabulary of the content area instead of just memorizing words in isolation,” says Dettmann. Students use digital probes with TI handhelds to record temperatures, pH, heart rate, and other measurements, and then they graph the data on the touchscreen monitor. The hands-on tools let them create visual images so they are part of the learning, says Dettmann.

By August, all middle school students will have a STEMsmart math and science class every day. Dettmann says that TI has been a fabulous partner and has installed teacher software on all touchscreen computers so they’re able to do formative as well as summative assessments. Student engagement is through the roof, with students telling her they love working with their peers. “Our teachers report that they’ve never worked so hard but have never had so much fun. They tell us they don’t know how they’d teach without all of these resources.”

Powers’ math students record measurements on their iPads. When we last checked in with Central Park Elementary in Bossier City, LA, the school had received a $15,000 grant from the Digital Wish 3M Screens for Schools competition. Fourth-grade math teacher Vanessa J. Powers used the money for iPad Minis and iPads. Her goal was to use the technology to do assessments that would allow her to differentiate and personalize instruction.

“Our children are 99% free/reduced lunch [recipients] and had very little exposure to technology, so they were extremely excited,” she says. They learned how to use the iPads to document their learning in a myriad of ways: jotting down notes, recording conversations, taking pictures of finished projects, and solving math problems. A local news team even did a story on how the technology increased classroom engagement.

Powers’ students used the iPads for a year and a half, after which her principal replaced them with LearnPads, which the students use for Accelerated Math and other personalized learning programs. (The iPads were given to classrooms with younger students.)

For the years that they used the iPads, Powers’ students showed the greatest academic gains in the Parish. One year, Central Park Elementary was among the top schools in the state for academic growth. “I think the gains are because the students are more engaged, which results in fewer behavior problems and more time to understand the content,” she says.

Luckily for the district, Powers will share what she learned as a classroom teacher when she assumes her new role as a curriculum coach in the new school year.

Elwood Middle School students love learning how to design and manufacture toys. When seventh-grade math teacher Matt McGuire won the Toshiba America Foundation Digital Fabrication for Community Service grant in 2013, he used the $8,872 to teach his students how to design and manufacture items using digital fabrication. McGuire, who teaches at Elwood Middle School in Greenlawn, NY, bought a CNC router that enables the students to cut their drawings out of wood. “For our first project, each class designed their own toys, such as Nok-Hockey tables and puzzles. They made 15 to 20 of the toys and donated them to a developmental disabilities institute near the school.”

Since then, McGuire has bought a 3D printer and a vinyl cutter. He’s hoping to receive another grant so he can purchase a laser cutter that will take the work students do on computers and produce it on machines, just as it’s done in the manufacturing industry. Some of his students have been able to bring the drawings they created in his classes to college and skip introductory courses. McGuire is also trying to set up a program with local colleges so that his students can earn college credits during high school.

“Getting this grant and the technology opened the door to move to digital Fabrication. The work we were able to do led the district into purchasing more tools and adding more funding,” he says.