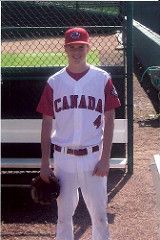 Our district uses its front page to post success stories from our 40 schools. These range from academic achievements to athletic accomplishments of school teams. Schools post the stories to their own Website and submit them to me to post to the district page where generally there is more traffic. This one was sent to me earlier in the week.

Tanner Spencer from Craik, SK, attended team Canada's World Junior top 35 camp in Orlando, Florida from October 5th to October 15th. Tanner is the youngest Saskatchewan player ever chosen to go. The majority of the team was from BC, Ontario, and Quebec. One player was chosen from the Maritimes, one from Manitoba, one from Saskatchewan and two from Alberta. Tanner started pitching the first game in Orlando, started the fourth game and closed the last game. He gave up no earned runs on six innings pitched. Congratulations Tanner.

As soon as I read it I realize they had violated our district policy which states we will never publish a photo of a student with a full name. I also realized in that moment how absurd that policy is.

As we explore the idea of a digital footprint and identity we must consider that at some point we want to our students to own their work and accomplishments and showcase them to a variety of audiences. If I'm Tanner or Tanner's parents I want as many people as possible to know of his accomplishments. I immediately sent out my concerns about our policy to our school technology representatives and one of the school leaders, Angus Mcintosh, responded this way:

It is in Tanner's very best interest, at this point, that everybody knows is name. He will have offers for scholarships to Major U.S Colleges and Universities and already has a collection of business cards from Major League scouts. The more people that know about him, the more choices and opportunities it will create for him. People "knowing" Tanners name started somewhere, and the word has spread that there is a very good young pitcher living in Craik and playing ball in Moose Jaw. He has many doors open for him to choose from.

But for every Tanner Spencer, there is the opposite. There are children with unfortunate backgrounds that need protection in terms of privacy. We know that and will always respect that. But I also think (hope?) they are as rare as Tanner.

And here's the point that is critical.

And then there is the rest. There are kids with special talents that few people know about. What about them? I would bet our schools are full of kids like Tanner but their talent is in Art, or Drama, or Math, or Writing etc. Most kids probably don't even know where their talent is! But if they did, would they be able to open the doors like Tanner has? How does a superior math student get "recruited" to a University? Can a dance student get into the National Ballet if nobody knows what they have accomplished? At some point everyone needs to "sell themselves" in a job interview, or a business proposal, or even a meeting with the bank manager for your first mortgage. If we can show kids that their accomplishments are to be proud of, and that the accomplishments are not anonymous, we can teach self confidence, and true self esteem.

While this confidence and self esteem can be and should be established offline even more so that online, we do a huge disservice to our students when in efforts to protect them we inadvertently rob them of the opportunity to be recognized.

I get pretty zealous over stuff like this and perhaps I've missed something here. If I have please share.