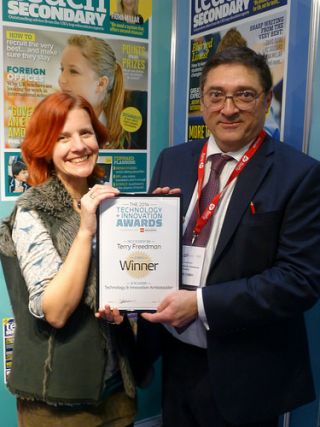 Over the years I’ve become almost inured to the inanities of the online world, and especially their manifestations in the world of education. So when I received an email declaring “Congratulations, you have won an award!” my first thought was “Oh yeah? I suppose all I have to do is submit my bank details and complete a 38 page questionnaire over a premium telephone line.”

However, this was one occasion when the cynical view, contrary to what George Bernard Shaw would have us believe, proved not to be the true one, because I had indeed won an award. As I had not even been aware I had been nominated, this was even more of a surprise. It was given under the auspices of the 2014 Technology and Innovation Awards, for being a technology and innovation ambassador. Well, I hadn’t even realised I was undertaking that role, although it makes sense: we are all ambassadors for, or advocates of, something. It’s nice to be thought of as making a reasonable job of it.

Helen Mulley, Editor of Teach Secondary, presenting me with the Award at Bett 2015

A close up of the Award

But the purpose of this article is not to boast as such, but to thank the Teach Secondary people for having such an award in the first place, the lovely people who nominated me for it, and the people who voted for me. It’s all very much appreciated.

The certificate has pride of place in my home, and whenever we receive visitors I make sure I sit them where they cannot fail to notice it (I’m just joshin’!). It was presented to me by the editor of Teach Secondary, Helen Mulley, at Bett 2015.

I will not allow this to go to my head, although I will expect gentlemen to doff their hats when they encounter me in future.