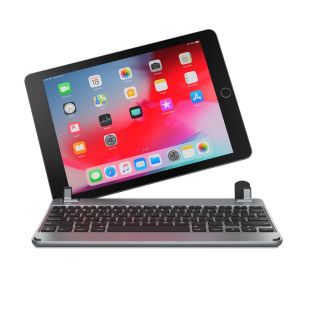 Teaching from home with an iPad doesn’t have to mean being stuck using the tablet’s on-screen keyboard. The $50 Brydge 9.7 keyboard-case takes a minute to install and provides a great keyboard and the ability to teach from home with a little extra grace.

Made of forged aluminum, the Brydge 9.7 keyboard-case is sturdy, has rounded corners and can protect the tablet’s back if dropped. The space gray, silver or gold look of the case matches the iPad’s design, making it seem as if it was designed as a notebook from the start.

At just over 1 pound, the Brydge 9.7 keyboard-case is light, ideal for transporting to school. Add in my sixth-generation iPad and the whole thing weighs a reasonable 2.1 pounds. That’s significantly lighter than a small notebook, such as Dell’s 3.1-pound Chromebook 3100, although that does have a larger 11-inch screen.

Securing an iPad in the Brydge 9.7 keyboard-case

It takes a second or two to install the case on an iPad, although some older 9.7-inch iPads and the iPad Air 2 will require using the included rubber hinge shims to get the tablet to seat properly.

The iPad is secured in landscape, rather than portrait, which gives it more of a notebook feel. The power button is on the upper left and the volume- up and down keys are nearby, along the top. The Home button is on the right which can make the fingerprint scanner awkward to use. Another issue is the webcam. It sits too low and ends up providing an excellent view of the user’s neck, unless you angle the tablet quite far back. Happily, the system’s back camera works well and isn’t obscured by the case.

The Brydge 9.7 keyboard-case’s hinge has smooth action but it can be a little awkward to open. There’s a small cutout to slip a fingernail in but it generally requires two hands to maneuver. Inside, it has 17-mm keys with about 1.5 mm of travel. Angled for comfortable typing, the keys are backlit with the choice of three light levels, which is useful if presenting in a darkened classroom. It’s overall very accurate, but the keys are a little too close together and I found myself hitting the wrong one on occasion.

Surprisingly sturdy (always useful in classroom environments), the screen doesn’t wobble even when I tapped it or moved items around. The Brydge case, however, lacks a trackpad or any place to stash Apple’s Pencil stylus.

The best part is that if a busy teacher needs to quickly change from using the iPad in notebook guise, it can be easily pulled away from the keyboard base for use as a pure tablet. It takes only a moment to put it back together again.

Flexibility and potential use for remote learning

With the Brydge 9.7’s keyboard-case, it’s quicker and more comfortable to type than the iPad’s on-screen keyboard. In addition to the expected letter, number and symbol keys, the Brydge 9.7 keyboard-case has a key to lock and unlock the screen, a Home key, the ability to control audio or video tracks as well as have Siri listen to (or ignore) your requests.

The keyboard-case I looked at fit like a hand in glove with my 6th-generation iPad, and also works with 5th-generation systems and Air units. There are models for 10.2- and 10.5-inch iPads as well as the first four generations of the iPad Pro. The problem is some of Brydge’s cases cost as much as $230. Your best bet to find the right Brydge keyboard for your iPad is to start at the company’s compatibility site.

While the Brydge case doesn’t use any of the iPad’s power to run the keyboard, the downside is that because the keyboard uses Bluetooth to connect, it still needs to be periodically charged. It comes with a micro-USB cable but no AC adapter.

A bonus is the keyboard’s battery gauge key. Press it for a few seconds and the Power LED blinks green for 75 percent or more charge or yellow for between 25 and 74 percent. When it’s red, the battery has for 24 percent or less of its charge. One charge was more than enough for a month of daily use.