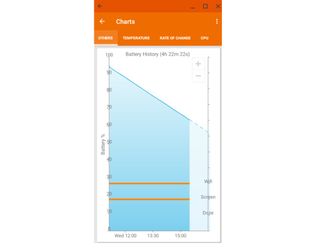 After a few months of using a Chromebook, one thing stands out: the rudimentary battery applet that displays how much charge is left is too basic for those interested in getting every last second of battery time. The GSAM Battery Monitor takes Chrome’s battery data to a new level with great graphs, the ability to run full screen and a way figure out where all that battery power is going. It’s free to use and well worth the storage space it requires.

The GSAM Battery Monitor took a moment to get and install. Once loaded, it can do its job behind the scenes, run full screen or as a small box that can float on the desktop. Unfortunately, some setup choices are blocked when it’s run small.

Either way, the app shows the system’s vital power functions. My favorites include the current charge level in a circular graph as well as voltage. The app’s all-important estimate of how much run time remains is in front and center.

Dig a little below the surface and the GSAM Battery Monitor takes a step forward with useful power-related items like which components and apps are using more power than others. On the downside, the app showed that the GSAM software itself ate up 2 percent of the system’s battery.

Open the left tab and see a bunch of graphs that can help get the most out of the system’s battery. A big bonus is that after opening the Screen or Wi-Fi section, there’re thoughtful shortcuts to the system’s Settings in these areas for adjustment.

In addition to the choice of eight themes and dozens of color schemes to customize the app’s presentation. I was able to set alarms for when the battery reaches a certain level or a specified temperature. The best part is that the longer I used GSAM Battery Monitor, the better its information – and feedback.

It’s free but the ads at the bottom of the interface can be annoying. Happily, they can be turned off in the app’s Preferences. The app will send anonymous usage details to GSAM Labs, however.

As good as the base app is, the $2.49 Pro version adds greater accuracy for computers that spend a lot of time in standby, like those that are used for a portion of the day. Either way, GSAM Battery Monitor picks up where Chromebook’s minimalist battery gauge leaves off.