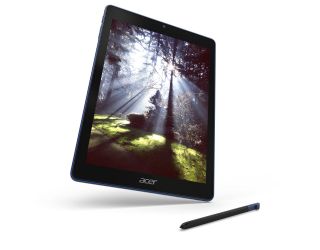 ChromeOS systems aimed at the classroom come in all shapes and sizes these days from all-in-one desktops all the way down to small tablets, like Acer’s Chromebook Tab 10. It’s cost, size and battery life emphasize the role it can take in early education.

At 0.4- by 6.8- by 9.4-inches and 1.1-pounds, the Tab 10 is one of the smallest and lightest tablets around. The rounded corners help make the system rugged, but it lacks anything like Gorilla glass to protect the fragile display. The back of the pad’s diagonal texturing makes it easier to hold and harder to drop.

Acer’s $40 protective case is a good start and brings the package up to 1.8-package. Like origami, it can be folded to create a tablet stand and allows access to the system’s on/off switch, volume control, USB C port and stylus but not the SD card’s slot. If that’s not enough protection, Max Cases makes a slightly lighter plastic cover that can render the Tab 10 just about indestructible. The $27 rigid clear case has soft bumpers and a pull-out stand, but neither it nor the Acer case include a keyboard.

The Tab 10’s 9.7-inch display is bright and shows the quad-XGA resolution of 2048 by 1536, which makes for detailed images, but is well below the Chromebook X2’s larger and higher resolution screen. Able to respond to 10 independent touch inputs, the bonus is its Wacom EMR pressure-sensitive stylus. The pen doesn’t require charging or a battery and was just as good for showing how to factor equations as it was for drawing maps for a history class.

It might prove to be a little small for the hands of a high-school senior, but the stylus should be perfect for smaller children. While there’s a place to stow the pen when it’s not being used, the Tab 10’s stylus lacks the ability to open an app by clicking the top (as the Surface Pro can) or to be easily tethered to the system or case.

Designed to stand up to the rigors of schools, the Tab 10 is based on a six-core OP1 processor that runs at 1.0GHz. It comes with a comfortable 4GB of RAM and 32GB of storage space, which should prove to be more than enough to tackle most educational roles for students and teachers. If more storage is needed, schools can add microSD cards of up to 256GB.

For video conferences, field trips or student movies, the Tab 10 has a 2MP camera facing the user and a 5MP one facing away. Its stereo speakers sound good considering its size but are not loud enough for the whole class to hear.

Over a three-week workout, the Tab 10 never let me down, regardless of whether it was used on its own or connected to a projector. I used it to write out and model sentences and run through different equations with the Desmos graphic calculator. Later, I used the stylus to sketch a timeline with photos and paintings using ArtCanvas.

The system’s 4,500 milli-amp hour battery pack played a variety of YouTube videos for 8 hours and 45 minutes with short hourly breaks, well short of the 12-hour battery life for HP’s Chromebook X2. Still, it should be plenty for a full school day of classes and enough left over for some homework on the bus ride home or at the library after school. On the downside, the Tab 10’s included 45-watt power adapter is large and requires a grounded outlet. The system worked with a smaller power adapter, but it might take longer to charge the tablet.

Inside, the Tab 10 has WiFi and Bluetooth radios for connecting to an 802.11ac network as well as to accessories, like speakers, a keyboard and mouse. I also used a generic HDMI adapter to stream the Tab 10’s screen to a BenQ projector. On the downside, unlike Samsung’s DeX full-screen desktop emulation, the Tab 10 it filled only about two-thirds of the projected image.

With a one-year warranty, the Tab 10 costs a reasonable $280, about what a basic Chromebook goes for; a year’s extension of coverage adds $115. Overall, the Tab 10 takes a step forward with a small and light Chromebook tablet that has the flexibility to teach a room of students.