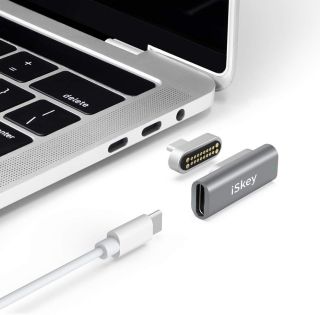 We’ve all seen it: a student trips over a power cord or yanks it and the notebook or tablet goes flying across the room with the inevitable consequences. The iSkey Magnetic USB C Adapter can put an end to this type of classroom tragedy by pulling apart when tugged.

When the two parts are brought to within about a quarter of an inch from each other, they snap together to form a single unit that allows the power and data to flow. But give the cable a yank and the two magnetic parts easily lose their grip and separate. This allows the system to stay put when the cord is pulled, averting a certain computer crisis.

Able to work with just about any USB C-based system’s cables, the adapter is good for PC notebooks, like Dell’s XPS 13 and recent Microsoft Surface Books, Surface Pro Tablets as well as newer MacBooks, iPad Pros and Android phones and tablets. Well designed and manufactured, the magnetic adapter is available in silver or gray, weighs 0.1-ounce and the cable sticks out 0.3-inches away from the notebook’s base. While it risks covering up an adjacent port, it’s easy to reverse the adapter’s orientation so it’s out of the way.

The break-away magnetic adapter has a sturdy aluminum case, 20 gold-plated connection pins for reliable transfers and a green LED that shows that it’s working. The adapter complies with the USB 3.1 standard, can move 10Gbps or stream 4K video and carry up to 100-watts of power. In other words, it should satisfy even the largest notebook. Its protective circuit cuts the current in the event of an electrical short, although the iSkey adapter is not UL certified for safety.

Easy to install and use, just plug the small part of the adapter into the notebook and the larger one on the end of a USB C cable. Happily, there’s no way to get it wrong, no software to install and no configuration changes to make. The kit includes the adapter’s two parts as well as a small plastic fork for prying the unit loose from a computer.

Over the course of a month, I used the magnetic connector with an HP X2 Chromebook, a Samsung Galaxy Tab S4, CTL Chromebox CBX1C and a recent Macbook Air. In each case, when I jerked the cord, the magnetic adapter broke free into two parts and the computer remained on the table, saving it from a potentially catastrophic fall. It kept the Tab S4’s battery charged for more than a week of daily use and doubled to send video to a projector.

For such as small device, the iSkey Magnetic USB C Adapter can be a lifesaver for school computers. It’s available on Amazon for $22 and might seem like a luxury. In reality, it’s a pittance compared to the cost of replacing a computer.