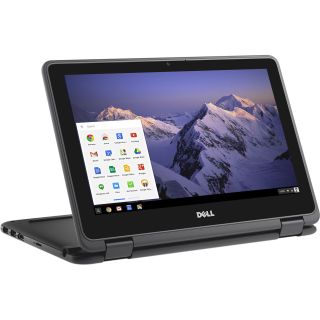 If you’re looking for a Chromebook that does more than the basics yet doesn’t bust the budget, Dell’s Chromebook 3100 2-in-1 system provides a lot of computer for the money. It can not only work as a traditional notebook or tablet, but its rugged design means that it will likely be around for a long time.

A traditional convertible design, the Chromebook 3100 has three distinct computing personas: it can be a keyboard-centric notebook for typing papers or taking exams, but flip the screen over the back and it’s a tablet or stop halfway and the system can stand on its own for small group interaction or viewing videos. There’s also a more traditional non-convertible Chromebook 3100 that costs $50 less.

Built around a rounded plastic case, the Chromebook 3100 weighs in at 3.1-pounds and occupies 11.5- by 8.0-inches of desk-space. At 0.9-inches, it is a few ounces heavier and significantly thicker than Samsung’s Chromebook Plus, despite having a smaller 11.6-inch touch screen that shows 1,366 by 768 resolution versus the Chromebook Plus’s 12.2-inch higher resolution 1,920 by 1,200 display.

The screen worked fine with up to 10 fingers at once or a generic stylus, but the system lacks and active stylus for precise drawing and notetaking. Dell plans to add a model this Spring that includes a stylus, but the $29 pen won’t work with existing Chromebook 3100 models.

To put it lightly, the Chromebook 3100 has been designed to stand up to abuse. It uses Gorilla Glass and passed 17 of the military’s stringent Mil-Std 810G criteria for ruggedness and the system survived drop tests from as high as 48-inches, 12-ounce spills onto its keyboard and 40,000 opening cycles for its hinge. In other words, it stands a legitimate chance of outlasting just about every other piece of classroom technology.

In an age where, phones, tablets and notebooks are glued together and not easy to service, the Chromebook 3100 is a blast from the past. Held together by nine screws, it’s one of the easiest Chromebooks to repair and upgrade. For instance, it takes a few minutes to get inside replace a component, like the battery.

Its 19.2mm keys feel good on the fingers and I was able to type quickly and accurately. Unfortunately, like the X2, the Chromebook 3100 lacks backlighting that might help in a darkened classroom.

Powered by a Celeron N4000 dual-core processor, the Chromebook 3100 normally runs at 1.1GHz but can go as fast as 2.6GHz, when needed. It includes 4GB of RAM and 64GB of local solid-state storage as well as two years of 100GB of online storage on Google’s servers. With a micro-SD card slot that can accommodate up cards that hold up to 256GB, it is a system that can hold a student’s entire middle- or high-school education.

As far as connectivity goes, the Chromebook 3100 is a mix of old and new with two USB-C ports, either of which is used for charging the system, as well as two traditional USB 3.0 ports. The system has Wi-Fi and Bluetooth built in and connected easily with everything from several wireless networks to a keyboard, speaker and a BenQ projector (using a generic USB-C to HDMI adapter).

The system’s two cameras cover the territory well, regardless of whether they’re used for a keyboard-based notebook in an online parent teacher videoconference or taking pictures of the school’s basketball game. While the Web cam produces images of just under a megapixel, in tablet mode, the world-facing camera can capture 5-megapixel stills and videos.

It may not be a power system, but it performed well over three weeks of daily use, and never let me down in a series of educational endeavors. The Chromebook 3100 scored 425 and 800 on Geekbench 5’s series of single- and multi-processor tests. That’s a 15 percent performance improvement over the more expensive Samsung Chromebook Plus with a faster Celeron 3965Y dual-core processor.

As powerful as it is, the Chromebook 3100 is a battery miser, running for 12 hours and 40 minutes of viewing YouTube videos with short hourly breaks. That’s an extra 40 minutes of use compared to the Chromebook X2. It will likely translate into a full day of work at school with enough time leftover at the end of the day for gaming or homework.

In a series of mock classroom situations, I used the system ChromeOS apps like

Desmos Graphical Calculator, Adobe’s SketchPad and Google Docs as well as Word, PowerPoint and Excel. Regardless of whether parents or the school purchases them, I’m convinced that the Chromebook 3100 should be able to take its place next to other Chromebooks at school.

Inexpensive, rugged and adaptable to different teaching and learning situations, the Chromebook 3100 can stand up to punishment at school while saving a few bucks along the way.