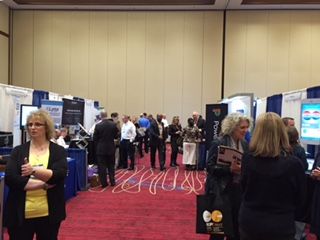 “Innovative technology in practice” was a popular theme at many of the 100+ sessions that took place over two days at TECHSPO 2016 in January. Now in its 21st year, TECHSPO hosted 1,000+ K-12 educators and administrator--plus nearly 100 workshop and exhibition showcase leaders-- at Harrah’s Resort Atlantic City, N.J.

“New Jersey has a large group of educators who want to take charge of their own learning,” says Scott Rocco, Superintendent of Spotswood Public Schools and co-chair of the New Jersey Association of School Administrators (NJASA) Technology Committee that hosts TECHSPO. “Our educators were early adopters of social media, and we have an active edcamp movement here. New Jersey school administrators are also engaged, often going out to these events on their own time.”

Keynote speaker Kevin Brookhouser, author of The 20time Project: How Educators Can Launch Google's Formula for Future-Ready Innovation, set the tone well with his speech on “Fueling Future-Ready Students,” which offered ideas on how to organize a Google-style 20% program in school districts. Sessions that showcased these and other innovative ideas included:

“New Jersey schools embrace risk taking,” says David Gentile, Superintendent of Millville Schools, and co-chair of the NJASA Technology Committee. “We encourage building a culture that lets teachers take chances. I think our teachers are always looking for innovate ways to change the game and be better.”

The co-chairs explained how the program reflected an evolving conversation about edtech in K-12 schools and districts.

“We’re not mandating that kids use any specific technology,” says Gentile. “Instead, we ask them to pick a problem of value to them and solve it. The kids decide what tools they need to do that.”

And there were plenty of tools on display in the busy exhibit area, which the attendees could explore during the dedicated breaks that were built into the program. Exhibitors included veterans like HP, Microsoft, and Dell, along with newer companies like Securly, zspace, and Firefly Computers.

The result was a conference that felt packed with useful sessions but not overwhelming.

For more information about Techspo, read their blog here.