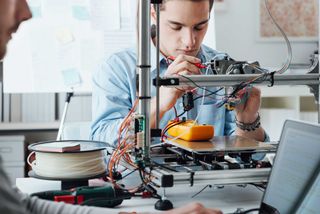 All it took was the purchase of one 3D printer to convince Upper Grand District School Board Specialist High Skills Major (SHSM) and Technological Educational Lead for Upper Grand DSB Charles Benyair that the new technology is integral to the future of his students and the community at large. Just two years after buying his first printer, the district has evolved to host a full network of over one hundred 3D printers, with curriculums modified in every subject matter, programs that encourage students to build parts needed by the local community, and trained teachers who have become experts in the skill.

Upon making the investment, Advanced assisted in the integration of Dremel 3D printers specifically into district schools, offering necessary tech support as well as establishing the critical professional development training needed to fully utilize the technology.

Since the Upper Grand District School Board invested in 3D printers, many students in the Upper Grand School District have worked with a printer, in subjects as diverse as math, science, technology, history, geography, art, design and literature. And, in addition to enhancing curriculum teachings with the technology, Benyair has taken the opportunity to involve his students in community service by solving local problems with 3D printing.

The district has also gotten involved with the “E-nabling the Future Prosthetic Hand Project”, which is made up of a community of individuals from all over the world who are using their 3D printers to create free 3D printed hands and arms for those in need of an upper limb assistive device.

Since implementing 3D printers into their curriculums, the average percentage of students taking a technology class grew to 40%, which is 10% above the national average.