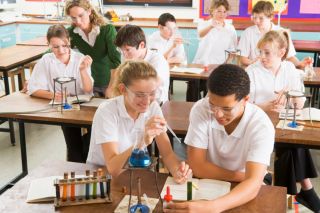 Rishab developed and tested his algorithm using images of the human digestive system, and found it could correctly detect the pancreas with a 98.9 percent success rate. The innovation aims to improve accuracy, reduce invasiveness and increase efficiency during treatment, resulting in better quality of life and chance for survival among patients.

A seventh-grader at Stoller Middle School in Portland, Ore., Rishab competed alongside nine other finalists during a live competition at the 3M Innovation Center in St. Paul, Minn. He was awarded the title of “America’s Top Young Scientist” and received a $25,000 prize.

The nine finalists received $1,000 and a variety of prizes from Discovery Education and 3M. The second, third and fourth runners-up also received a trip to a taping of a show on Discovery’s family of networks.

In second place: Mehaa Amirthalingam, an eighth-grader at Sartaria Middle School from Sugar Land, Texas, developed a toilet flushing system that uses both fresh and recycled water to reduce water consumption in the home.

In third place: Leo Wylonis, an eighth-grader at Tredyffrin-Easttown Middle School in Berwyn, Pa., designed a device for airplane wings that mimics the twisting motion of a bird in flight, increases fuel efficiency and reduces carbon emissions.

In fourth place: Sriram Bhimaraju, a sixth-grader at Harker Middle School in Cupertino, Calif., developed an Archery Assistant app that improves an archer’s accuracy by correcting form in real-time using a Bluetooth sensor.

For more information on the 2018 Discovery Education 3M Young Scientist Challenge and to learn more about this year’s finalists, go to www.YoungScientistLab.com.