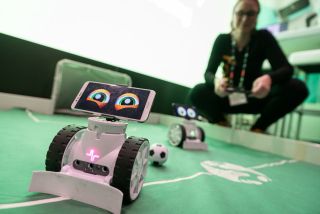 Microsoft’s keynote led with new research that examined what teachers would need in the classroom of 2030. Anthony Salcito and Barbara Holzapfel, Affective Computing researcher Dr. Daniel McDuff, and NetHope Emerging Technologies Initiative Lead Leila Toplic explored the technology that will empower educators to navigate the changing needs of the staffroom and the classroom and enable students to accelerate their impact and transform the world.

Universities, Science, Research and Innovation Minister Chris Skidmore announced at the Bett Official Opening the funding of trials of ground-breaking assistive technology for pupils with special educational needs and disabilities in up to 100 schools and colleges.

Erik Hanson of Apple took to the stage in the Bett Arena to discuss the critical role of creativity in driving human progress and innovation in the world today. During his talk Erik explored how creativity is brought to life through Apple’s Everyone Can Create curriculum, which helps educators find the creative genius in every child.

The final and most eagerly anticipated talk of the evening was Professor Brian Cox, OBE, arguably the UK’s best known experimental physicist. Professor Cox talked about revolutionary technology and how this has helped to further our gaze deeper than ever into the beginning of time, including telescopes that are now able to take photos of blackholes that are billions of light years away. He also described how digital sky surveys have allowed scientists to map the locations of stars and galaxies to form a 3D map of the universe, and spoke of the ability of the stars to map events throughout time.