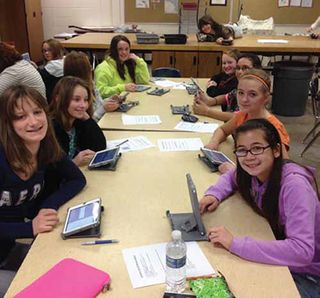 On day two of its 1:1 iPad rollout, Edgerton students came to school smiling.

If you’re like the majority of SchoolCIO readers, you’re probably well beyond asking if it’s time to go 1:1 because you know it is. You’ve already started—or are well into— beefing up your infrastructure and increasing wireless access. Perhaps you’re at the laptops vs. tablets part of the conversation and are determining which products will best suit your district’s instructional needs.

Now comes the hard part: How are you going to pay for it? Maybe with one of the following strategies …

Edgerton (WI) School District had nineyear- old computers and ten-year-old servers when it began exploring 1:1 and BYOD a year ago. “We realized we’d be creating gaps with BYOD. Some children have smartphones, some have laptops, others have nothing, so we decided to go 1:1 and figure out how to fund it as we did it,” says Dennis Pauli, superintendent. The solution? Redistributing funds.

The district formed a team that developed standards and then talked about how to meet them. Teachers who wanted to go 1:1 had to take 30 hours of professional development, for which they received an iPad instead of a check. Pauli pulled funds from ESEA, Title II, and the common school fund; each school also gave up certain things to free up additional money.

They purchased 700 iPad Minis for students and 100 iPads for teachers, but did not use any money from last year’s referendum. “We thought community members might see the iPads as a toy and not as a tool, so we used money from our budget,” says Pauli. “Next year we’ll use about 14 percent of our building budget to get 400 more iPads. We’ll ask everyone again to see what they can cut in their current budget to make 1:1 work.”

“From the start, we focused on what we want students and teachers to do—not on the device,” says Phil Klamm, principal of Edgerton Middle School. “It’s easy to get people excited when we think about what we can do in the classroom, and that makes funding decisions a little easier to make.”

Strategy #2: Saving for a Rainy Day

Four years ago, Michael Mason began adding money to his capital funds bucket. “It’s not like I had a box under my desk,” says the superintendent of Reeds Spring (MO) School District, “but that’s our fund for big-ticket items like buses and renovations, so I tried to put money into it whenever I could, knowing we’d use it someday for something big. It was kind of like saving for a new car.”

Mason never wanted money to be a factor in going forward with a 1:1 program, particularly because his district has a high percentage of free/ reduced lunch students, so he’d stick leftover funds into the capital account at the end of each year. When they began talking about 1:1, the money was there.

Rather than buying, the district chose to lease its Lenovo ThinkPad 230T tablets. “At the end of the lease cycle, we’ll have 700 three- or four-year-old devices. I wasn’t sure I could sell them,” says Mason. Plus, he knew he’d have to pay to dispose of them. “With leasing, I can spread the $700,000 price tag over a three-year period, and at the end of the lease I can say, ‘Come and get ’em.’ It just made more sense.”

Mason cautions districts to not get too carried away thinking they’ll save money by not buying textbooks. “We won’t buy paper books but we do buy online or e-books,” he says, “and we’ve saved only about 10 percent.” However, districts can experience significant cost savings when they cut back on printing. “Once teachers develop a system, they don’t want to carry papers, lose papers, or spend time at the printer.”

To help fund its four-year 1:1 program for 5,000 high school students, Niles Township (IL) High School District 219 has reworked some of its services. “We saved money by not printing and mailing our student handbook,” says Guy Ballard, CTO. The district also began delivering report cards and progress reports digitally and saved $25,000 per year on postage. “Open-source resources and open curriculum have the potential to save districts like ours thousands of dollars a year,” says Ballard. “We’ve saved another $25,000 by using e-books and open-source materials.”

By moving to Google Apps the year before 1:1, Ballard enjoyed even more cost savings. “We don’t print and hand out papers anymore. We send a link to a document or collaborate in a Google Doc.” Bye-bye Exchange server, which cost $40,000 a year to maintain.

For Ballard, it’s all about creative solutions. “What might work for me doesn’t necessarily work for others, but you need to think outside the box and don’t take stuff for granted. Just because you’ve always had an Exchange server doesn’t mean you’ll always need to,” he says.

Clear Creek (TX) Independent School District bought 30,000 Dell Windows 8 tablets for its 1:1 computing initiative with part of a $367 million school bond that passed in May.

Even though the tablet portion of the bond was minor—the majority is going toward new construction and renovations—it was the most-talked-about element of the bond proposal. But the district answered the community’s concerns head on. “With parents, our message was about 21st-century teaching and learning,” says Elaina Polsen, director of communications. “They knew we lacked adequate technology in our schools. To the non-parent audience, we focused on the cost efficiencies and benefits of replacing six- to eight-year-old laptops with tablets. Basically, purchasing two tablets for the cost of one laptop and the long-term efficiencies, such as reduced paper, electronic textbooks, and so on. For the business community, the message was about preparing workforce-ready graduates and how technology can aid in that effort.”

Overall, people were excited about the 1:1, but one group referred to the tablets as “consumables” and didn’t think they should be funded under a bond program. Again, the district responded. “Our parents and teachers are fully aware of the lack of technology currently in our schools, especially in K-8. For them it’s a step in the right direction, a worthwhile investment.”