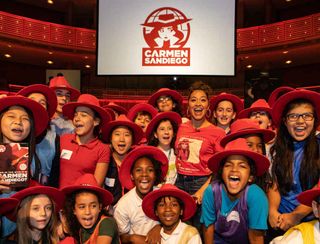 Houghton Mifflin Harcourt (HMH) is introducing  globetrotting super-thief Carmen Sandiego to a new generation, beginning with the launch of a new animated series debuting Jan. 18 on Netflix and produced by HMH.

To celebrate Carmen's return, HMH partnered with Miami-Dade County Public Schools this week to bring nearly 2,000 students together for a live event with superstar Gina Rodriguez, the new voice of Carmen.

Carmen's return will include: