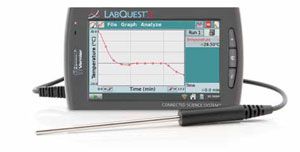 Quality and Effectiveness: Vernier’s LabQuest 2 is an openended handheld tool that can be used to collect sensor data at a rate of 100,000 samples per second. This 12-ounce touch tablet integrates graphing and analysis software for data gathering and visualization in STEM subjects. Its rechargeable lithium-ion battery lasts about six hours for stand-alone work before it must be recharged with the supplied power adapter. With two digital ports, a USB port, and three analog ports, the LabQuest 2 can collect data from dozens of connected sensors or a USB flash drive. The unit also has a builtin microphone, stopwatch, calculator and GPS, plus an 800 MHz application processor for data gathering.

Ease of Use: Preparing the LabQuest 2 for use couldn’t be simpler. The LabQuest 2 comes with five built-in sensors for data acquisition. It features 3 Accelerometers (X, Y, and Z), plus sensors for Temperature and Light. The unit’s builtin software offers many options for data collection, viewing, and analysis.

Suitability for Use in a School Environment: While the first generation LabQuest interface comes with several ports, its 416 MHz application processor is about half as fast as the 800 MHz ARMv7 processor that ships with the LabQuest 2. Similarly, the first generation LabQuest has only a 320 x 240 pixel color touch screen, merely 40 MB RAM for storage, and lacks Bluetooth and Wi-Fi capabilities. LabQuest 2, on the other hand, boasts 200 MB of RAM, and almost twice the display resolution. LabQuest 2 also features support for Vernier’s Connected Science System, allowing users to share data using the built-in Data Share software by connecting the handheld to any device (including iOS and Android) with a compatible Web browser.

• Compatible with over 70 sensors and probes for real-time data collection and analysis.
• Built-in graphing and analysis software to visualize and make sense of complex data.
• Works stand-alone or with a computer.