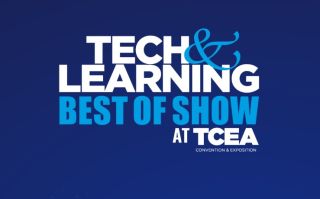 Tech & Learning presents its annual awards program that honors nominated products at the annual TCEA conference. The products below were selected by an anonymous panel of educator judges, who scoured the exhibit hall floor during the conference in Austin. The judges rated their impressions of individual products on a sliding scale, evaluating areas such as quality and effectiveness, ease of use, cost, and creative use of technology. They then met in person to decide which technologies deserved to be named Best of Show.

“Congratulations to the following winners of the Best of TCEA contest,” says Tech & Learning Group Publisher Christine Weiser. “Our judges evaluated each product for its uniqueness in the market and the ability to solve problems in classrooms and schools. There were a variety of solutions nominated for the award, and our judges were impressed with the standout features of the following products.”

Please join us in congratulating the following winners! A more detailed feature will run in our March issue.