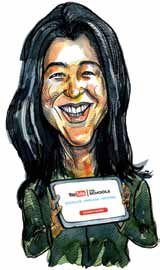 Streaming video and digital textbooks in the classroom. Stronger assessments through technology. Build your own curriculum and the globalization of education standards. These issues are no longer speculation but reality. These are the people that are making it happen. Ready or not, here they come.

Sure, you still probably still use YouTube for crazy pet and cute baby videos, but with 800 million unique users a month, there is no denying that the video site has changed the world. Now Angela Lin, overseer of the recently launched YouTube Education project, is hoping to do the same for the classroom, just without the pets and babies (or worse). “This marks a major advance in the unfolding YouTube.edu story,” Lin says. “By cordoning off YouTube searches instead of just blocking them, elementary and secondary teachers can start using YouTube to support their lessons.” A new coding system will enable school network administrators to have more control over which YouTube videos are available to students on public or shared computers in their libraries and classrooms. Teachers can also search by topics and even “grade-level” TED talks like “Doodling in Math Class: Infinity Elephants” and MIT’s “Introduction to Computer Science.” Like it or not, videos are quickly becoming part of the everyday curriculum.

Everyone who goes to a TED event or watches one of its highlight clips comes away feeling not only a little bit smarter but a little bit cooler. Logan Smalley is charged with bringing that feeling to the world’s classrooms. He is the director of TED-Ed, a new program from TED conferences that provides customizable video-based lessons for free to teachers and students. His current efforts include animating hundreds of audio lessons recorded by educators around the globe and making them available via TED-Ed. “In the very near future, by the educational virtue of the Internet, a single teacher’s voice will be audible to billions, and a single student’s ideas may be nurtured by the entire world. [We believe that] a student’s curiosity is the only limitation to learning, and [this] is what the TED-Ed team and I seek to catalyze every day.”

How could a young administrator who runs a rural school district in Arkansas influence the future of education? The judges who selected Dr. Matt McClure as one of the winners of the 2012 ASCD Outstanding Young Educator Award concurred that the rising star and superintendent of the Cross County Schools (AR) is impacting the field in many ways. McClure says that the most important component of his work is helping students prepare for their futures, whether they are pursuing higher education, vocational or technical training, or stepping directly into the workforce. “One of the biggest changes in rural areas is directly correlated with the flattening of the world. Students and individuals in these areas [need] to have access to information and opportunities at the same rate as their urban peers and the ability and requisite skill sets to live anywhere,” McClure says. “Access to technology and a great education can be the great leveling point to ensure that all students, regardless of geography, have the skills, knowledge, and habits of mind to succeed in today’s global economy.”

It’s safe to say that when it comes to edtech, Harold Rowe has seen it all. This year’s recipient of CoSN’s 2012 Withrow Award currently serves as the associate superintendent for technology and school services of the Cypress Fairbanks Independent School District (CFISD) in Texas where he has over 35 years of experience in the field of information technology. He wears a lot of 10-gallon hats. He is responsible for technology, transportation, plant maintenance, and housekeeping operations at CFISD. This district is the third largest in Texas, and serves 87,000 students at 60 campuses. As his district goes, so most likely shall yours. “The biggest changes in tech and learning are, clearly, the abundance of relatively affordable technology [such as] smartphones, tablets, and readers, coupled with seemingly infinite, highquality content available online,” says Rowe. “It is a tipping point. Given this powerful combination, our students in rural areas will lag in progress if we do not remain vigilant in ensuring broadband services are available to them.”

Having issues about assessment? Send them to Dr. Eva Baker. She co-chaired the committee that produced Standards for Educational and Psychological Testing published in 1999. She currently directs UCLA’s Center for the Study of Evaluation (CSE), the Center for Research on Evaluation, Standards, and Student Testing (CRESST), and an ancillary CRESST-sponsored project called the Center for Advanced Technology in Schools (CATS). Baker focuses her research on incorporating instruction and measurement, evaluating design and practical validation of principles for developing instructional systems, and learning new measures for studying complex human performance. Baker believes that testing as we know it will have varying shelf lives depending upon purposes. “In the shorter run, they will be incorporated in learning proficiency systems where completions undefined will be accumulated and tagged,” she explains. “These proficiencies or qualifications can then be referenced to content, skills, problem solving, and other innovations that will matter in unpredictable new jobs, social and self-management skills, and affective and personal development.” In other words: The bubble test is dead!

If you ask most educators about heady concepts like the “future” and “globalization,” they’ll probably ask you, “Who has time to think about such things?” Fortunately for us, Yong Zhao does. He currently holds the position of Presidential Chair and Associate Dean for Global Education in the College of Education at the University of Oregon. He is also the director of the Center for Advanced Technology in Education. He has published more than 100 articles and 20 books, including “Catching Up or Leading the Way: American Education in the Age of Globalization.” Born in the Sichuan Province of China, Zhao is an advocate of the creative use of modern technology to support student learning. He also encourages teachers to study emerging technologies to better reach students of different cultures in other countries. “Schools have to truly become global with technology to both draw resources and share expertise globally.”

Say what you will about Google, but there is no denying its influence in education technology. There are more than 16 million users of Google Apps for Education, which are provided to schools and state programs for free. The Google Chromebooks for Education program has already been implemented in 41 states and seems to be the next most popular device mentioned by educators after the iPad. Jaime Casap is Google’s “education evangelist.” He spreads the Google love into classrooms around the world, showing teachers and students alike how to reinvent education for real. “As a father of two kids, I can already see the impact that my education has made on them. Yet, my 11-year-old’s classroom looks almost exactly the same as mine did 30 years ago,” says Casap. “There is a lot of opportunity here to improve technology and access in education to bring the outside world into the classroom.”

L. Rafael Reif is the Provost and Maseeh Professor of Emerging Technology at the Massachusetts Institute of Technology. He also championed the development of the online learning initiative MITx, an interactive program designed to organize and present course material so students can learn at their own individual tempos. MITx offers online laboratories and studentto- student communication. This program also provides individual assessments of work and the opportunity for students to earn a certificate of completion for course study outside the confines of the university setting. This free, groundbreaking program will soon be available to K-12 school systems and other universities, giving students everywhere the chance to supplement their classroom education with online tools. “Students worldwide are increasingly supplementing their classroom education with a variety of online tools,” says Reif. “Offering interactive MIT courses online to learners around the world builds upon MIT’s OpenCourseWare, a free online publication of nearly all of MIT’s undergraduate and graduate course materials. Now in its 10th year, OpenCourseWare includes nearly 2,100 MIT courses that have been used by more than 100 million people.”

Martin Dougiamas’ Moodle software may be the most recognized yet least understood in edtech. He began working on the Internet when he was 10 years old – in 1986 – which truly earns him the lifelong moniker of “Internet guy.” He is also the reason open source continues to grow in education circles. When he launched his first version in 2002, he says, “I was frustrated with the existing commercial software at the time.” Since then, the project has been growing exponentially in terms of size and activity. “I work from home each day with many different people from around the world on an ever-widening variety of things. It’s challenging but exciting and certainly gives me good reason to jump out of bed in the mornings.” As of December of 2011, Dougiamas’ course management system had a user base of 72,177 registered and verified sites, serving 57,112,669 users in 5.8 million courses. Be ready—it should be coming to a classroom near you.

You can’t really talk about the reality of digital textbooks until Pearson CEO Marjorie Scardino talks about it. So when Scardino declared that one-third of Pearson’s projected £5.8bn revenues were to come via digital channels in 2012 and announced the company’s close collaboration with Apple’s eBook initiatives, consider the conversation started: “I’m not in the business of building beautiful books. I’m in the business of engaging children and that takes a lot of other things,” she says. “You need to have an engaging way to present a lesson not just graphically but intellectually.” Scardino, who spoke to Tech & Learning at SXSWedu about Pearson’s digital strategy, considers the systemic adoption of these devices to be essential. “The exciting thing for tablets is when you put a whole school up on them and you can do everything and connect so that it [becomes] a tool rather than a book on a screen.”

We know what you’re thinking: Where are the teachers? In each of the past three years we have received complaints about the lack of actual educators on our list. Point taken. But even though we love our teachers and tech coaches (after all, we highlight them every month in print and every day online), the most influential of them all isn’t going to sway the nation’s curriculum adoption to digital like Marjorie Scardino can.

That being said, here are two educators honored this year for their contributions to edtech by the National School Board Association. From NSBA’s 2012 "20 to Watch" list:

Andrea Keller has taught special education for nine years and the last four of those years have been in a pervasive developmental disorder K-3 unit. Although Keller's students are often low-verbal or non-verbal, she adapts and modifies so they can participate in podcasting, vodcasting, and video conferencing. Her grant for 50 webcams allows all of the self-contained LIFE/PDD units in the district to video conference with other special needs students and classrooms around the globe. See more on her blog, Busy Bee blog, http://busybeeideas.blogspot.com.

Rather than seeing Facebook as a distraction, Geometry teacher Felicia Owen is now using it for interaction both inside and outside the classroom. By allowing students to submit assignments using their cell phones, some previously underperforming students became very responsive. Owen's innovative use of social media in the classroom has inspired other teachers and attracted local press coverage.