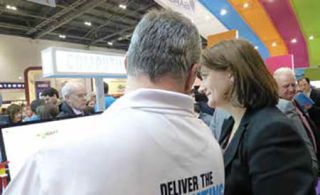 Attendees prepare for the biggest edtech show in the world.Bett is to education technology what CES is to the wider technology world. Every year, thousands of people flock to this education technology show from all over the world. Now in its 31st year, Bett continues to expand and experiment—a far cry from when it opened with a couple of dozen exhibitors in one hall.

Generally speaking, Bett tends to be good for four things: catching up with old friends, meeting new ones, finding out what’s new, and getting an overall picture of where things are going. This year was no exception, but I’d like to focus in particular on that last one: what did Bett tell us about the current trends in education technology?

1 THERE HAS BEEN A CONTINUATION OF THE MOVE TOWARDS INTEGRATED SOLUTIONS.

This appeared in several guises. For example, Microsoft announced Office Mix, which allows you to collaborate with others on PowerPoint in real time. Google announced Google Play for Education, which makes educational apps easily available for staff and students. In fact, given Google’s presence in the device, apps, and cloud markets, there is almost no reason that a school should need a virtual learning environment or learning platform, or to fret about backups and storage. Other companies have come up with similar “one-stop shops.”

Another example of integration is how working has become even more accessible from wherever you are. For example, the Capita SIMS app allows teachers to access and add to students’ records of attendance and achievement from their phone or tablet. This is synchronized with the school’s central data bank in real time. For example, a student can be awarded a “Well done” certificate in her lesson, and be congratulated on that achievement by the principal as she walks out of the classroom.

2 THERE WAS A PROLIFERATION OF ASSESSMENT SOLUTIONS BUILT INTO CONTENT AND ACTIVITY APPLICATIONS.

For example, Edmodo has teamed up with Cambridge University Press to make it easy for teachers to set assignments using real past examination questions without having to spend hours finding them. Other systems have their own assessment modules that make it easy for the teacher to set tests, record the results, and see who is falling behind.

3 A BIG TREND IN ENGLAND RIGHT NOW IS THE DEVELOPMENT OF “CODING” APPLICATIONS.

Programming now has a central focus in the national curriculum, so this is hardly surprising. What is surprising, though, and refreshing in a way, is that companies have not rested on their laurels and taken the view that kids can use Scratch or Python. True, many of the new programs look remarkably similar to programming languages like Scratch, Python and, for those old enough to remember it, Logo. But the contexts and the way the instruction is presented are different. For example, several vendors were showing their robot packages that are driven by their own versions of those programs, thereby taking advantage of the current interest in the “maker” movement. Whether it’s using Arduino, Raspberry Pi, or building robots, there is a substantial liking for what might be called “hands-on computing” here in England.

4 THERE WERE MORE INTERACTIVE PANELS ON VIEW THAN I REMEMBER FROM PREVIOUS YEARS.

Even SMART has got in on the act. (An interesting take on the SMART board is SMART Kapp, a kind of dry wipe board that enables you to save and share what you write on it.) I don’t think this is a new trend as such, but what struck me was how old-fashioned the latest interactive whiteboards looked. I can’t wait to see what’s unveiled at Bett 2016!

Terry Freedman is an independent educational ICT and computing consultant in England. He publishes the ICT in Education Web site at www.ictineducation.org.