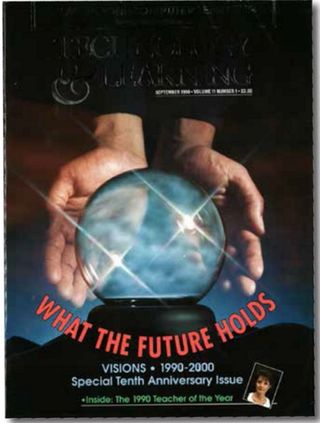 Over the years, Technology & Learning and its predecessors have written about the big edtech issues as they’ve arisen and the concerns that educators have had about them. So this month we’ll look at what we’ve thinking about for the past 35 years. And we’ll see how these concerns compare to our big ideas and worries today.

Our first issue of Classroom Computer News in September 1980 cited facts and figures in the lead story. “Of the 16,112 public school systems in America, 30 percent have computers for instructional use. In the next four years, this could increase to 60 percent.”

We were eager to talk about the possibilities yet we were worried about our ability to use computers for appropriate learning tasks and to take advantage of the unique capabilities of computers to help students learn.

In particular, we were concerned about using computers as electronic workbooks—to generate and correct arithmetic problems and monitor student progress. We said, “Using the computer exclusively for tasks that other tools can do as well…limits the power and uniqueness of this tool.”

In the early days between 1981 and 1982 we published articles on how classroom computers could make a difference. We noted that research raised more questions than answers about the machines, techniques, and software.

In September 1984, Herb Kohl wrote in Classroom Computer Learning, “The first criterion for evaluating educational software is to decide whether the computer is necessary to teach what the program attempts to teach…or is it mere dressing that seduces one into practicing the irrelevant?”

A cover story in 1985, “Girls Don’t Like Fluff Ware Either,” tackled the perennial issue of gender with a look at the software industry’s attempts to interest girls in computers.

Things moved quickly. By 1986, interactive video was the next big thing and educators were hooked. The emerging technology was telecommunications, and two years later we published a three-part primer on networking that introduced educators to the technical and educational implications of introducing LANs in their schools.

In 1990, with the perspective of ten years, we chronicled software trends. Broderbund spawned new genres: design programs like The Print Shop and collaborative problem-solving software like Oregon Trail. Another trend was the use of productivity tools in the classroom—word processors, databases, and spreadsheets.

■ Interest in purchasing MS-DOS computers for student use.
■ Increases in memory, graphics, and other capabilities that led to new software features. For example, built-in speech capabilities spurred the development of software programs that talked.
■ Networking. When IBM set up its networked PS/2 labs in schools, it led to another trend—the rebirth of integrated learning systems with ILS curricula redesigned to address state-developed frameworks.

Then the Macintosh with HyperCard became the first machine to demonstrate the promise of multimedia technologies and hyperlinking. Nothing was ever the same after that. The explosion of the World Wide Web in the 1990s relied on hyperlinks.

That tenth anniversary year saw schools focused on funding for technology and developing partnerships with businesses. Holly Brady, the editor in chief of the newly renamed Technology & Learning said, “This new crop of software developers are merging software with video, sound, music, and voice to create powerful new teaching tools unlike any you’ve seen before.”
Our first cover article about the Internet in 1993 recognized its promise to “open up a universe of resources for the classroom.”

For T&L’s fifteenth anniversary in 1995, we said, “What fell in the realm of science fiction less than a decade ago is a reality today in schools across the country.”

The next year saw the release of two important documents from Washington. The Department of Education published the first National Educational Technology Plan, and Congress passed the Telecommunications Act of 1996, which included the E-Rate.

Widespread telecommunications brought new challenges and opportunities. We saw the need to teach students to be savvy media critics; we designed effective AUPs; and we started to tap into virtual school experiences.

Edutainment tried to gain a foothold, but as T&L editor Susan McLester noted, “Today’s better educational offerings are doing an excellent job of holding their own with popular consumer titles as more and more publishers tune into something that educators have always known: that the best kind of learning is always engaging.”

As Technology & Learning looked ahead, the biggest issues in the year 2000 were both perennial and signs of the times. In an age in which the Web looked a lot like the Wild West, educating students to be media literate was essential. Professional development was a major concern as well, and the hope was that “Anytime, Anywhere PD” would herald a new era of flexibility.

Over the following few years, the issues start to look familiar. One-to-one was growing, and T&L reported that pioneering schools that gave students their own laptops saw improvements in attendance, dropout rates, and learner engagement.

In the early 2000s, we began to think small. Power, portability, and price merged such that the time was right for handheld devices in schools.

In 2003, Congress passed the No Child Left Behind Act and we entered an era of requirements to measure student achievement, more stringent teacher certification standards, and testing—all of which technology made more feasible.

The major concern in 2010 was data-driven decision making. T&L noted that data became the defining term of the new millennium’s early years as education struggled to implement business analysis practices. In 2005, we reflected on the mainstream place of technology—both in society and in schools—by asking the following question: “Are digital-age students fundamentally different from the rest of us?”

Other concerns included wired versus wireless, portable MP3 players for podcasting, and handheld computing. Computers got smaller and bandwidth got bigger. Tools and apps replaced installed software and products on a server or computer.

By T&L’s thirtieth anniversary in 2005, some of the primary issues in edtech were cybersecurity, privacy, smartphones in classrooms, funding, personal learning networks, and online learning.

Big decisions included how to handle an influx of personal mobile computing devices, and those conversations centered on network infrastructure, policy, instructional strategies, and preparing teachers for this change.

Between then and now, we’ve seen many of the same issues remain center stage and we’ve added STEM, BYOD, digital video, tablets, and going mobile. As always, funding, accountability, online testing, and professional development are on our minds. We still talk about the most effective uses of technology for teaching and learning.

We’ve come full circle on at least one concern from 20 years ago. Our 1995 list of worries included “Will kids become antisocial if they spend lots of time at the computer?” Today we see how social media has transformed everything, including students’ often too-social behavior.

In 2015, in our thirty-fifth year, Kevin Hogan said, “The debate over the value of education technology never ends. While no one really argues anymore whether or not there should be computers in the classroom, student tablets are still a touchy subject (especially in Los Angeles). The peril of students cheating via email and text now pales in comparison to Snapchat sexts and mass broadcasts of Common Core answers via Twitter. And let’s not get started on automated standardized testing.”

What will we be thinking about in the next few years? According to the latest NMC Horizon Report, we can expect to see BYOD programs, cloud computing, mobile learning, and makerspaces take root. In the next two to three years, 3-D printing, visualization, learning analytics, and adaptive learning technologies will become common. In four to five years, researchers expect to see badges for validating achievements and microcredit transactions, drones, visual data analysis, and wearable electronics.

Whatever the odds are that these trends will become the next new things, T&L will be here reporting on them—and on the other tools, techniques, and topics of interest.

1 Gender equity: Why do fewer girls flock to the computer?
2 All kinds of equity: Is technology widening the gap between the “haves” and the “have nots”?
3 Will kids become antisocial if they spend lots of time at the computer?
4 Will computers replace teachers?
5 Are computers too abstract for little kids?
6 Should computers be placed in labs or in the classroom?
7 Does technology improve learning? Can we prove it?
8 Will/should computers replace textbooks?
9 Will/should computers and related technologies do away with the need for basic skills such as handwriting and long division?
10 Should computer-based curricula be set from the top down in the form of comprehensive, integrated programs such as ILS, or should individual teachers pick and choose for themselves?
11 Will teachers ever embrace technology fully?
12 How do we invest in new hardware without becoming obsolete by next year?
13 Is the software out there any good?
14 Do we need national standards and, if so, what should they consist of?
15 When budgets are tight, is technology the right way to spend money?