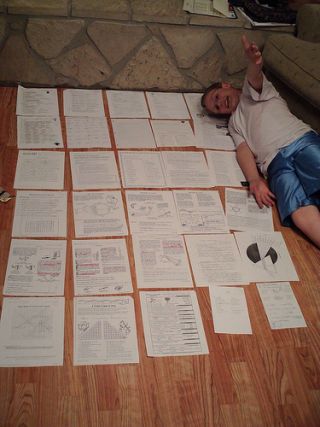 The use of worksheets is often derided. You hear expressions like “death by a thousand worksheets”, and even a Government Education minister (now ex-Minister for Education) has weighed in, saying that teachers should use textbooks instead of worksheets [1].

Leaving aside the observation that how teachers teach is, in my opinion, none of the Government’s business – it’s the equivalent of telling doctors to use electronic blood pressure monitors rather than the manual kind – there are perfectly compelling reasons to use worksheets in the Computing classroom.

What is a worksheet?

But first, what exactly is a worksheet? We may think of it as a sheet of paper, but it doesn’t have to be. It could be a web page or a slide show. It all depends on context and purpose.

I think the phrase “Death by worksheet” must have arisen due to the tendency of some teachers in some circumstances to rely on worksheets to keep the class quiet. Well, guess what? I have too on occasion. There are some kids who don’t believe they are working or that a real lesson is going on unless they have been given a worksheet. You have to start with where the kids are, unless you want to be in constant riot control mode. So in my experience in that situation you have to ween the kids off them gradually. For example, I might give them a worksheet with some bits and pieces to complete when they entered the classroom, and then after ten minutes have a class discussion about their answers.

What about death by a thousand textbook exercises, or copying out? The worst examples of teaching I’ve seen is where the “work” is copying something out, whether from a textbook or elsewhere. For instance, one class I observed were give the task of entering hockey scores into a spreadsheet, so that they could then work out averages and so on. I asked the teacher why he hadn’t given them a spreadsheet with all the data in it already, leaving aside the fact that the exercise was pretty pointless anyway. He said it was to give them practice at keyboarding skills. I told him that keyboarding skills were not on the National Curriculum, and in any case that wasn’t the stated purpose of the lesson. In that instance, an Excel “worksheet” with all the data in it, with cells highlighted in which the students were to insert formulae, would have been much more useful, and potentially far less boring.

As far as I know, there is no textbook for the new Computing curriculum in England.

There are textbooks for established examination courses though, but which one should you use? When I was teaching Economics, I used a range of textbooks because there was no single one that was good enough for every topic. Sometimes, worksheets can be used to guide students to the best resources to use. In that case, the worksheet supplements the textbooks, it doesn’t replace them.

What is wrong with creating worksheets that give information about how to carry out particular procedures? For example, one of my “worksheets” was a reference sheet listing the formulae in Excel. That enabled students to get on with their work without wasting time waiting for me to answer their questions or looking up how to do it or getting it right by a combination of luck and trial and error.

It also meant that they didn’t interrupt their peers – something that tends not to be mentioned by the advocates of approaches like “Ask three and then me”. If I were a pupil, being constantly interrupted by people asking me how to do something would drive me nuts. I speak as one who knows: when I worked in a Local Authority, I was in an open plan office, which meant that my train of thought was being constantly disrupted, unless I escaped to a room somewhere or a cafe down the road. These options tend not to be available to pupils.

If a student has finished their work, why not have them take a worksheet that suggests next steps, rather than your having to repeat it umpteen times or write it on the whiteboard or project it as a PowerPoint slide? In this situation, it means that the student can get on, and it buys you some time: you can continue talking to someone who needs some help and then check on the fast workers later.

Worksheets can be used to provide extra help for students to didn’t understand the explanation the first time. Again, in this case the worksheet might be a list of websites or videos to look at.

If you are teaching ICT and Computing through project work, and groups of kids are all working on different projects, how would a textbook be useful, even if there was one? But a worksheet suggesting websites to go to for research (there is more to research than Google and Wikipedia!), and perhaps some useful tips on interviewing people, or how to record data, could be just what is needed.

I think anyone who decries the use of one kind of resource in all circumstances is almost bound to be wrong. You can have death by PowerPoint, death by video, death by interactive whiteboard, death by anything in fact. Surely what matters is being able and willing to use the most appropriate tools at your disposal in the most appropriate ways?