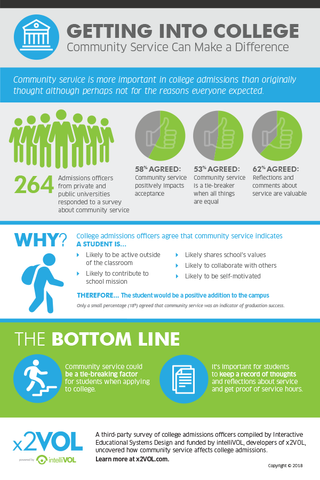 When asked if a student’s community service had a positive impact on higher education institution acceptance, 58 percent of respondents agreed and only 16.5 percent disagreed. Private schools were more likely to agree with this statement than public schools.

Reasons why service is deemed important were somewhat surprising. Researchers initially expected that responses would skew heavily toward leadership and motivation. Instead, the top ranking reason was that service indicates students are more likely to be active in student social life outside the classroom (70.8 percent). Respondents also said service indicates students are likely to contribute to the school’s mission (68.6 percent) and that students share the school’s values. Service as an indicator of self-motivation and ability to collaborate ranked fourth (64.6 percent).

“From over 10 years of helping high schools manage community service hours, we intuitively know that service can help a student get accepted into college,” said Michele Pitman, founder and CEO of intelliVOL. “For years, admissions counselors and students have told us that community service hours were instrumental in getting accepted. This survey confirms that service plays a significant role in getting into college, especially as a tie-breaker when other factors on an application are similar.”

x2VOL sponsored the survey because the company is the most widely used program to track, verify, and report community service and service learning hours. x2VOL also produces the Official Service Transcript™ (OST), which is now available to order along with GPA and SAT/ACT transcripts. The OST is the only official and verifiable service transcript recognized by colleges and universities. Students with individual memberships of x2VOL+ or at schools with the institutional version x2VOL can order their OST at the same time they order their SAT, ACT, or academic transcripts, which will be sent directly to the college(s) they request.