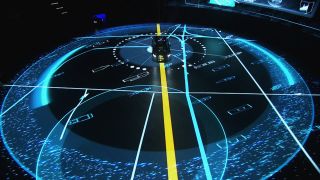 Each of the cars featured in the show was fitted with ‘BTBeacons’ which transmitted the exact position of the vehicles as they moved around the stage to ‘BTCams’, which then relayed the information to the lighting console so that any lighting look could be designed while automatically following the cars on the stage, regardless of speed or direction, with an accuracy that would not have been possible to achieve manually.

Another big part of the reveal, was the futuristic graphics projected on the floor and not only accented the beautiful car, it also helped explain some of the A8L’s new built in technology and features. The mapped projection interacted with the car as it drove around the stage. As well as the BlackTrax system, the Audi A8L launch show featured no fewer than 30 Panasonic PT-SRZ31KC projectors, 72 Acme lighting features – being used by Redline for the first time – two gx 2 and four 4x4pro media servers from disguise and motion graphics from Notch.

“The cars were the stars of the show – so it was vital that they were accurately highlighted by the supporting audiovisual technology,” said Andrew Gordon, Director of Business Development. “BlackTrax is unique in its ability to automate the tracking of moving objects by projectors, spotlights and so on – which is why it’s being used increasingly in major product launches worldwide.”

“For this show, BlackTrax was invaluable because we did not have the opportunity to have a rehearsal with the cars,” said Jack Sun, CEO at Redline. “But with BlackTrax, we really didn’t need one – we just set it up, and got precisely the effect we were looking for.”

“We’d also like to thank William McDaniel from BlackTrax for his excellent support during the project design,” added Sun, “which contributed greatly to an amazing event.”