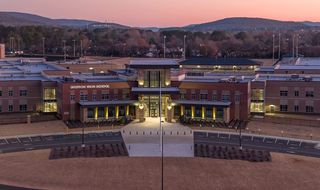 Framingham, MA – Huntsville, Alabama’s newly-built Virgil I. Grissom High School, named for one of America's original Mercury astronauts, is a state-of-the-art educational facility, and its Martha deFord Hayes Auditorium employs a ShowMatch DeltaQ loudspeaker array from Bose Professional. Audiovisual systems integrator ESB Group of Springville, AL, designed and installed a ShowMatch system consisting of a left and right hang, each including an SMS118 subwoofer on top with four ShowMatch loudspeakers below. These are powered by three Bose PowerMatch PM8500N networked amplifiers, and managed through a Bose ControlSpace ESP-8800 processor.

The 750-seat auditorium has a modern design, with large, sculpted diffusive panels on the sidewalls and absorptive panels on the rear wall. However, the distance between the top of the proscenium stage and the ceiling in front of it was minimal, due to architectural constraints, according to Clint Parker, an AV installer and programmer with ESB Group and the project manager for the ShowMatch installation. “ShowMatch was the best choice for this, because it offers you a whole lot of sound from a very compact array,” says Parker. “The arrays had to go into a fairly tight spot, but with ShowMatch, we didn’t have to compromise on the sound quality.”

The ShowMatch system was also easy to hang – Parker notes that the installation pins lined up perfectly every time, allowing the installation to proceed quickly and accurately. But it was the sound of the ShowMatch loudspeakers that impressed everyone: “ShowMatch sounded great right out of the box,” he says. “When we first fired it up, we were getting comments about how good it sounded before we even started tuning the system. The mid range is especially clear, making the intelligibility of the system extremely high, and the low end from the SMS118 sub is big and consistent. ShowMatch is really advanced audio technology in a school that’s built around high tech and in a city that prides itself on being innovative. The ShowMatch system here was a great fit in a lot of ways. The school loves the way it sounds.”