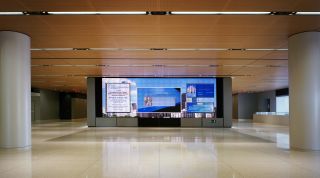 When New Era Technology of West Chester, Pennsylvania was asked to upgrade the video technology driving a ChristieMicroTiles wall at the University of Pennsylvania’s Perelman School of Medicine, the integrator chose the Christie Spyder X80multiscreen windowing processor.

The MicroTiles wall, located on the first floor of the Smilow Center for Translational Research, had previously employed a Christie Spyder X20 processor. Located in a high visibility area outside an auditorium, the multifunctional wall displays pre-recorded daily content and handles overflow video from events in the auditorium. It also shows content provided by other groups wanting to benefit from the public space.

“Everyone with business in the Smilow Center sees the wall,” says Scott Randinelli, Project Manager at New Era Technology. “The new equipment is part of a lifecycle upgrade that eventually will lead to upgrading the wall itself. Now the video wall offers Spyder X80’s advanced capabilities, including stepping up to 4K and 8K content.”

The project marked the first Spyder X80 installation by New Era. “We have had a relationship with Christie that goes back close to two decades under our previous company name, Advanced AV,” says Randinelli. “It makes a lot of sense for the X80 to be the vehicle for future upgrades for any high profile display.”

“The flexibility, power, and simplicity of the Spyder X80 makes it a wise choice,” concurs Jason Wines, Christie Sales Engineer for Content Management and Processing. “With the X80, customers are future-proofing their investment since there are no limits in processing power for the next-generation of display. They can also choose any size, shape or arrangement of display technology today or in the future and not worry about programming or the back end configuration. The new Spyder X80’s megapixel canvas makes integration with current source formats and ultra-high resolution displaysquick and easy.”

The company adapted existing daily content for the wall and determined protocol on how to support content supplied by special user groups and export video from the auditorium to the wall. New Era Technology Senior Engineer Frank O’Hara worked with the Christie team in the beginning of the project to engineer the upgrade allowing New Era Field Engineers Jeff Daddario and Steve Rogers to collaborate with Programmer Eric Howell from Christie during the commissioning phase of the project. Eric Capozzoli was the Project Manager, Media Technology & Production, Space Planning & Operations at the Perelman School of Medicine.

Christie Digital Systems USA, Inc. is a global visual and audio technologies company and a wholly-owned subsidiary of Ushio Inc., Japan (JP:6925). Consistently setting the standards by being the first to market some of the world’s most advanced projectors, complete system displays, and cinema audio solutions; Christie is recognized as one of the most innovative visual technology companies in the world. From retail displays to Hollywood, mission critical command centers to classrooms and training simulators, Christie display solutions and projectors capture the attention of audiences around the world with dynamic and stunning images, accompanied by awe-inspiring sound. Visit www.christiedigital.com.