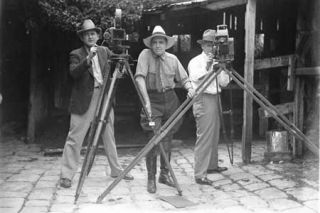 When the Russian Empress Catherine the Great visited Crimea in the late 18th century, the nobleman Grigory Potemkin is meant to have had fake village facades erected along her travel route, as well as to have spruced up some of the existing visible buildings (and people), so that she would be fooled into thinking that things were better than they really were. While historians have expressed considerable doubt about whether this actually occurred (indeed, many place it in the category of persistent "cultural myth"), the concept of a Potemkin Village, where things are tarted up so that occasional visitors get a false sense of reality, is not too difficult to understand.

Over the years I have visited hundreds and hundreds of schools in scores of countries to get a sense how they are using (and not using) technology. Whether in rural Eritrea or highly developed, urban Singapore, as an outsider I am always conscious of the fact that there is an element of 'show' to what I am seeing -- or at least that there might be. The act of observing can often change what is being observed (social scientists refer to this as the Hawthorne effect). As an employee of the World Bank, I know that government officials who arrange and accompany me on school visits often want to showcase what 'works', and what is 'best practice'. This is especially the case where World Bank (or other external) funding has been involved, as people are eager to show that related monies have been well spent.

This is not always the case, of course. I was once lucky enough to visit a school in Latin America for children with special educational needs in a country that was buying *lots* of technology for use by teachers and students. We arranged to meet the relevant government officials at the school early in the morning so that they could act as our guides. However, it turned out that there were actually two schools for special needs students located on the same street in different parts of the city -- and we had gone to the wrong one. After waiting for a while in the office of the headmistress (who was clearly surprised that we were there), it was decided that we should just begin the tour and start talking to people. A few hours later, after the national educational officials had finally figured out where we were, we were picked up and driven to the 'correct' school. It will probably come as little surprise that our experiences in both places were quite different. Chats with teachers, administrators and parents at the first school contrasted rather markedly with the quite sunny picture presented to us at the second 'showcase' school. This is not to say that we couldn't learn anything from the showcase school, however, just that we learned different things -- and perhaps had to work a bit harder to do so.

In a school that I visited in the Middle East, I was treated to a 'best practice' example of technology use in education that I found in many ways to be, in fact, 'worst practice'. The teacher had obviously spent a lot of time putting together an elaborate PowerPoint presentation, which he had loaded onto every student desktop. The class then proceeded to, in unison, page through the presentation, individually answering the multiple choice question presented on each slide. Once they had modified the relevant slide to reflect their answer, the teacher projected the correct response onto the whiteboard at the front of the classroom, at which time each student was directed to mark down on a separate piece of paper whether s/he had answered correctly or not. Teachers from visiting schools were actually present in the classroom as well, on a study visit to learn about 'best practice' pedagogical examples that they could model once they returned to their own schools. The fact that this was the 'showcase' example of technology use in this particular school told me a lot about the official, prescribed approach to using the quite expensive, quite new computing devices being rolled out across that education system.

Not all school visits are about putting on a 'best face' for outsiders. When working for an NGO, I visited a school in South Asia and stumbled across a whole bunch of computers stacked away neatly in boxes in a storage closet. I immediately concluded that this was yet another sad example of computers sitting unused in schools ... but it turned out I was wrong. An official visit from the ministry of education was due the following day, and the principal did not want the central government to know that she had already procured lots of computers from a local civic group, as well as from the municipal authority. If the central government knew this, the school would most likely not receive its promised allotment of computers under a new national school computerization scheme.

Trying to view and interpret what you see and hear from multiple perspectives can yield some useful insights and perspectives. I once participated in a multi-school study tour alongside many 'international experts' who wanted to see how new technologies were used in schools in a very 'advanced' country in East Asia. Most of these folks were aghast at the highly prescribed, drill-and-kill nature of the computer use that they witnessed, which was touted as 'best practice'. These guys are doing it all wrong, one of the experts observed, there's nothing innovative or 'disruptive' about what's going on here. Have these people never heard of constructivism? "Yeah, you're probably right," I replied. "But this kind of depends on your frame of reference, no? Go have a look at what's happening in the classroom next door and then come back, you may find that what's happening here may be a little more 'innovative' than you thought."

what you 'see' depends on your perspective

Many people who work in a given field long enough develop a sort of carpenter's eye that enables them to make quick assessments and judgments about what they are seeing in ways those less experienced in the field may struggle to do, and in fact may see things that remain effectively invisible to others. When walking into a room, a carpenter can often quickly judge, for example, whether an angle is truly 90 degrees, or that a wrong tool was used for a particular job, or make educated guesses about why one material was employed instead of another or that something is destined to break. Such judgments may not always be accurate, and may be informed by various biases, but they are often qualitatively different than those of people less skilled and experienced with woodworking, who may not notice such things -- and in fact may not care about them, or understand why they might be important.

If you visit a 'showcase' school, it can be difficult translate what you see and learn in ways that might make such learning relevant to educational contexts in other environments. Indeed, the answers you receive, both explicitly and through observation, and the conclusions you draw from them, may not apply in other contexts (and especially in circumstances that are 'less ideal' or 'less advantaged'). That said, visiting a showcase school needn't be a waste of time. Seeing 'the best' can help you get a sense of what might be possible in a place, or at least what is desired or thought important. That said, it can also be *very* misleading, sometimes even dangerous, to draw conclusions or try to generalize too much from one context and then assuming that it will be a straightforward process to translate your conclusions into things that might be applicable or relevant to other, less advantaged environments. Variability between schools can be great -- indeed, variability between individual classrooms in a school can be quite large as well.

Breaking down your investigation into many smaller constituent parts, and then considering how each part may relate to other environments, can be a useful exercise to help develope your 'carpenter's eye', better calibrating your questions, honing your approach, focusing (or broadening) your lines of inquiry -- and sharpening your skepticism. Posing questions, including ones to which you assume you know the 'answer', can also help provide you with insight into what other people *think* is important -- as well as reveal what you yourself might think is important as well.

When on a visit to see how new technologies are being used in a given school --especially if that visit is short and officially arranged --how might you make the best use of your time?

Even conceding that what you see may represent an 'ideal' scenario (or at least someone's conception of what is 'ideal'), and may not be terribly representative of the reality of technology use in other schools (or even of its use in that particular school when you are not around):

Are there things that could can look for, and questions you can ask, that nevertheless offer the opportunity for insight?

The next EduTech blog post will explore some questions to consider when visiting a school to learn about how technology is being used.

Note: The image used at the top of this post ("just 'act natural' and pretend we're not here") comes from the filming of the 1928 Australian silent film "The Romance of Runnibede" and is in the public domain. It was discovered via Wikimedia Commons and is available from the manuscripts, oral history and pictures search tool on the web site of the State Library of New South Wales (Australia) using Item ID: 10609. The second image ("what you 'see' depends on your perspective) of the back side of a building facade in Aukland, New Zealand also comes via Wikimedia Commons and is in the public domain.