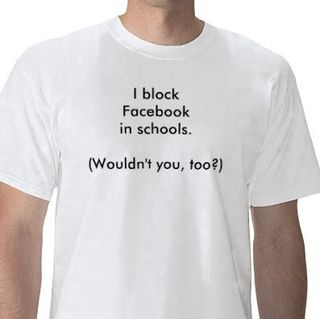 Last week, we made a conscious decision to block Facebook from being accessed on our network. Being a K-12 public school district, I personally didn’t feel that it was in the best interest of our students to allow them to access a site that, while arguably brimming with educational potential, is most often used for nothing more than recreational interaction among participants.

Of course, it's not that play is bad. Rather, it's a matter of fighting for balance and the cognitive attention of our students. For when Facebook hasn't been blocked in our schools, students have tended to spend inordinate amounts of time on the site - forming gangs, playing cards, writing on walls, and poking each other (ahhhhh, just like high school).

Or am I wrong?

Am I alone in thinking that Facebook is roughly 98% play + 2% academics when it comes to the unchecked use of today’s “typical” teenager? And tell me: What percentage of teachers can be trusted to ensure that Facebook is actually used by their students for legitimate learning?

Glorified baby-sitter? Any time. Sensible and essential pedagogical tool? Well, that depends on the teacher.

Interestingly enough, this decision to **gulp** block Facebook was made just days prior to the release of a study conducted by a group of researchers whose focus centered on the ethical issues inherent to the educational utilization of social networking (Foulger, Ewbank, Kay, Popp, & Carter, 2009). In examining the practices and attitudes of preservice teachers and how they might use popular social networks with their students, the use of both MySpace and Facebook was constructively analyzed. According to their conclusions, "social networking technologies enable a new spectrum of teaching and learning opportunities in the classroom..." Without question! "However, they present a number of ethical vulnerabilities that may be unlike those encountered in other areas of the teaching profession" (p. 18). That's what I thought!

It’s those ethical vulnerabilities that worry me most – with “should I really ‘friend’ my ninth graders?” merely scratching the surface.

Nonetheless, I’m as sure as you are that this is a debate far from over, and therefore maintain a stance of open inquiry into whether or not we’re doing the right thing. So give it to me straight:

Because opening the flood-gates is just the beginning.