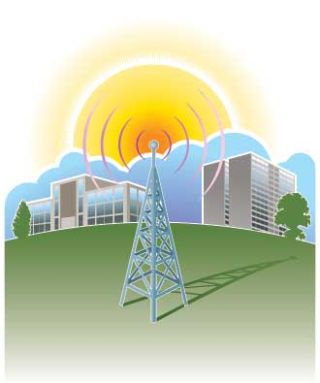 I don't know exactly what's wrong,
I feel like we're not connecting anymore
Few would argue with the contention that access to the Internet will be increasingly important to teaching and learning (and to learners and teachers) in the future.Internet: Yay!
Some argue that expanding the conversation around access in this way is simply too much. Increasingly the Internet provides the dial tone for development, and it will do so for education as well. With this in mind, they argue that perhaps we should just focus on what's most basic: providing connectivity. There is still much to do in this regard when it comes not only to connecting the unconnected, but also to increasing the speed, reliability and affordability of existing connections. In a world where many services and applications are increasingly moving to 'the cloud', access to connected networks and the Internet becomes even more critical. This movement is perhaps happening more slowly in education than it is in other sectors, but momentum and opportunities are growing. Even where schools are being connected to the Internet in greater numbers and at greater speeds (a new initiative from UNICEF and Project Connect is trying to map the results of such efforts, as well as the extent of the challenge), inadequate investments in networking within schools can mean that, while a firehose of connectivity is deposited at the schoolhouse door to help solve challenges related to the 'last mile', overtaxed school wi-fi networks mean that students only can access their school's broadband connection to the Internet in small drips and dribbles at the 'last meter'. All of this is complicated by the fact that 'acceptable' levels of connectivity are a moving target; the appetites of students and schools for connectivity only increases with exposure, and with the amount on offer.

That said, it is 2017. No matter where you are, conversations about broadening the access to the Internet to help meet the needs of learners and educators are growing louder in ministries of education, part of broader, related discussions around connectivity in the communities and populations that they serve.

When it comes to providing access to the Internet within educational settings, and for educational purposes:

Some technologies are maturing and others are emerging, past failures (of omission and commission) are becoming more apparent, and political will is increasingly in evidence in many places.

With this in mind, might a 're-think' be in order?

Providing Internet connectivity to schools has been an important pillar of approaches to providing wider access to Internet connectivity in many countries. Schools and libraries often serve as de facto community access centers to the Internet for important public constituencies, most notably for students and teachers, as well as for other members of their local communities. Many of the models and approaches to do this over the past quarter-century around the world have been informed by the experience in the U.S. related to the use of a special 'E-Rate' to support the roll out of connectivity to schools and libraries, enabled by the creation and utilization of special Universal Service Funds. (It is difficult to imagine a number of high profile international examples of prominent national ICT/education initiatives without the use of Universal Service Funds; Portugal, Kenya and Jamaica are notable examples.) In Uruguay, which has provided broadband connectivity to all schools and distributed computing devices to learners and teachers (devices meant to be used and connected to the Internet both inside and outside of school), students have been seen as an important 'vector' through which connectivity and connected computing devices could propagate throughout society.

When it comes to providing Internet connectivity to schools, and to support learning more generally, it is only natural that whatever we do tomorrow will build, explicitly and implicitly, on what has come before: infrastructure; usage scenarios; technology paradigms; 'good practices'; partners; and coalitions.

At a general level, there are a set of simple questions that are seemingly timeless and 'evergreen', and so we should continue to ask them in 2017 and beyond, just like we did ten and twenty years ago:

That said, we've learned a lot over the past two decades, and it might be worth asking some different questions as well, based on this experience. Along the way, we also might have discovered that some of our original answers weren't the 'right' ones, or are no longer as 'correct' as they once were. We are, no doubt, captive to some extent to legacy thinking, wedded to use cases and paradigms that may not be as useful going forward as we found them to be in the past.

To what extent can and should we be 'future-proofing', or at least 'future-sensitizing', new plans and approaches to broadening access to the Internet to help support teaching and learning?

When it comes to the Internet, there are a number of ways that we can think about issues related to 'access' in education.

Are we talking about access to connectivity only? Might we also be talking about access to devices that enable people to take advantage of this connectivity? If so, should we also be considering access to digital content and services through these devices? (Portugal considered all three types of 'access' when tapping USF monies to support its large roll-out of ICTs in schools.) Are there other types of access that might be worth exploring and supporting as well -- such as access to skills that would help students utilize this digital infrastructure efficiently and effectively?

Should countries focus on ...

Which questions are chosen, and what answers are provided, will depend on local contexts, of course.

Whatever our collective and individual definitions of 'access' might be, they won't matter all that much if we are unable to put them into action, of course. Funds and attention are always limited, and so, as a practical reality, areas of priority focus need to be identified.

If notions of public access to the Internet (e.g. through schools) had been originally conceived in low income environments or by low income users, and if related perspectives, concepts and models were first to emerge from some of the poorest communities and least developed countries in the world (and not formulated by 'elites' in the rich countries of the OECD), how might our understanding of what 'access' means be different?

Returning to the question of how we might define 'access' in 2017 and beyond, here are three final questions to consider:

Traditionally, discussions and efforts to promote greater access to connectivity within the education sector have focused on connecting specific places like schools, libraries and community centres. In some more advanced countries, this has been about providing access at home as well. There have been many reasons for this, including the fact that devices (especially PCs) were hard to move around, and so largely anchored in place. If you were a student and wanted to get connected, you had to go to one of these places. In a world where more and more students have their own, increasingly powerful connected computing devices with them at all times (like it or not, more and more students are getting smartphones at younger and younger ages, and this trend is unlikely to abate any time soon), a focus on place may be less relevant going forward than it was in the past.

Historically, radio spectrum (i.e. the frequencies that are used for things like mobile telephony, wi-fi, Bluetooth, broadcast radio and television) has been considered a scarce resource. Going forward, it is expected that technological advances will mean that previously underutilized spectrum can be effectively exploited, and that frequencies now heavily used can be utilized even more efficiently.

An assumption in many conversations about 'expanding access' in which I've participated is that we are talking about 'secure ' ('trusted') connectivity. But ... are we? It is worth remembering that e.g. providing public access to the Internet can be used for many things, including to facilitate surveillance -- even in the education sector. Indeed, in certain places around the world, this can be an argument put forth in favor of it.

As we move forward, debates about how to provide greater access to the Internet to support teaching and learning become both more critical and more complicated (and likely more contentious). Our understand of what exactly 'access' means is likely to change. Technological advances and business innovations will mean that the potential utility of this access for learners and educators, and the schools and education systems that support them, will change as well. Who will benefit from this access, how, why should we care, and what should we do about it? If we are serious about ensuring opportunities for education for all, indeed learning for all, such questions will need to be asked with greater frequency, at greater volume, by more people, with greater urgency. Educators and learners, and the systems and institutions that support them, should not wait and expect seats at the table where related decisions are made: They should demand them. These are no longer questions about technology to be formulated and answered largely by the 'technology folks', but rather are questions that will be fundamental to teaching and learning practices, and their results.

People who wish to participate in related debates may wish to check out some of the very useful reports issued by the Broadband Commission (especially its working group on education) and the Alliance for Affordable Internet (A4AI). There are many groups doing great work in area, but familiarizing yourself with these two groups might provide a good point of entry into related discussions. The IEEE convenes and supports very useful knowledge exchanges on topics related to 'Internet inclusion' (a recent IEEE event in Washington, DC provoked and informed this blog post).

Note: The image at the top of this blog post of a boy and his teddy bear ("I don't know exactly what's wrong, I feel like we're not connecting anymore") comes from Pixabay. The second image of two rather happy young gamers ("Internet: Yay!") also comes from Pixabay. Both are in the public domain (CC0 1.0).