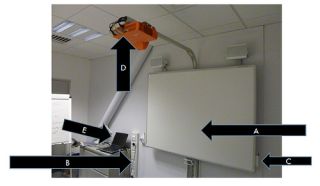 Spaces and learning; spaces should be designed according to the kind of learning that people would like to experience in them. Those were the title and theme, respectively, of a talk I gave at the B2Camp conference on the Built Environment in November 2010.

As part of the talk, I used the slide shown below, of an interactive whiteboard, and focused in particular on the item labelled "C" -- the pen. This type of whiteboard will work only with a pen, so if the pen goes missing or is damaged, and there is no replacement to hand, the lesson as planned could be ruined.

I used this as an example of why, when designing classrooms and even entire schools, discussion needs to take place not only between the Principal and the architect; and not only with pupils. It needs to involve the teachers as well, because it's the teacher who is going to be using the room who will ask (awkward?) questions like:

What about the pupil who has a wheelchair?

What about the sunlight coming in directly from that window?

Where's the pen going to be kept?

When I said this, I assumed I'd be rounded upon, but as I explained, if a Principal hasn't actually taught with an interactive whiteboard, s/he cannot necessarily be expected to know the fine detail of what's involved. That's not being disparaging to anyone but, in my opinion, a fact of life: unless you have actually done a particular job in a particular way or with particular tools, you can't be expected to know all the things that need to be considered. In fact, the same applies in reverse, of course: every teacher in every staffroom has an opinion on how the school could be run better, but it's only when you've been in a senior leadership position that you can fully appreciate all the "little"; things -- which usually aren't little in terms of their importance -- that are entailed in decision-making.

The interesting thing, though, was that there were nods of acknowledgement from the audience, and in her talk Carol Verity, an internet marketer, said that a large part of her job was asking website owners, “But where’s the pen?”. And someone in the adience, during the break, said to me that he spent a large part of his time as a designer of factories saying to company directors: “But have you been down on the shop floor lately?” In effect, asking, “But where’s the pen?”

Of course, there is nothing new in this idea that, often, it's the smallest detail that can make something a success or failure, and it is very well expressed in a traditional children's rhyme:

Every enterprise, every project, needs to have someone on board who is going to keep asking -- nay, insisting:

But where's the pen?

A slightly different version of this article was posted on the ICT in Education blog.Related articles