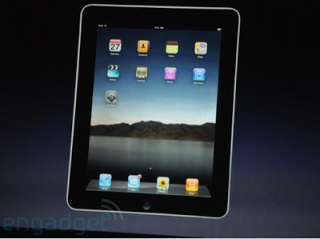 Applejust announcedtheir long awaited and anticipated tablet/slate, the iPad. Steve Jobs described it as something between a smart phone and a laptop.

It is really an over sized iPhone. It runs the same operating system and can use the same applications. iPhone apps look a little weird on it, but they are releasing a software developers kit so that developers can modify their applications for the iPad.

This device has been heralded as a "game changer" by many in the technology, and education sectors. It is a very cool device, but I don't know that it is the game changer they expected.

Like the iPhone, the iPad is a thin tablet. It even has the center button like an iPhone. It is 1/2" thick, weighs 1.5 pounds and has a 9.7" (diag) screen. The screen is multi-touch and capacitive. Memory comes in 16GB, 32GB or 64GB (flash memory). It has Bluetooth and WiFi also. Apple states that the battery lasts 10 hours with a month of standby. My guess this is a combination of a new chip from Apple and the fact that the operating system does not multi-task.

There will be support for 3G wireless in some models too. They have a special deal with AT&T with lower prices and prepaid (no contracts). The GSM will be unlocked also.

I was surprised that there is no camera on it. I would think a forward facing camera would be good for video conferencing.

That's right, no mention of multi-tasking on the iPad. For me, this is not good. It also has a virtual keyboard only. These two things make this less of a productive or educational tool. I can't imagine a student doing research and creating content and projects on a device that doesn't multi-task. Every time they left an app, it would close. It would also be difficult to do much typing on a virtual keyboard that is flush with the screen instead of tilted. I think that a laptop is still a much better educational tool than this.

Now, if they have an app that can use a special stylus and allow students to take handwritten notes in a digital pad, that might be useful for some.

There is a Bluetooth keyboard with a stand to support the iPad at a nice angle, which would make it better for productivity and educational uses. No word on price or availability.

I think the device is very cool and is great for web browsing, checking email, watching videos, playing games and the like, but I don't see it as anything that great as a productivity or educational tool. Not yet at least. I think that developers can create some great apps to make it more useful, but it has limitations.

They also announced a new app for it: iBooks. iBooks is the eReader/Bookstore for the iPad. Apple has partnered with publishers to create content for the iPad. So far it just looks like an eReader. I was hoping to hear that the publishers were creating interactive books with links, popup definitions, and more. Hopefully that will come in the future.

They do offer a version of iWorks for it (separate cost) so that you can do word processing, spreadsheets, and presentations.

We'll see what happens as it matures and develops and more apps appear. The Bluetooth keyboard and stand is a nice accessory to make it easier to create, but then you lose the "slate-ness". You can't use it on your lap like I use my laptop or netbook. You can type with the virtual keyboard on your lap, but that takes some time to get used to.

I really want to see multi-tasking and native flash support. Flash support should arrive soon though.Palm's Pre and Pixiwill be the first smart phones to get native Flash support next month. Then Adobe will be porting the technology to other platforms.

It is a really nice device. I think that it does fit between a laptop and a smartphone as Steve Jobs said. However, I think laptops will be more useful for work and education. The iPad might be great for at home and travel, but it is lacking some things that I feel are essential for productivity and creation.

But my $300 netbook does more than this and has multi-tasking, Flash support, a real keyboard, support for peripherals, and millions of apps. I guess if you are already an Apple user (especially iPhone or iPod Touch) then this would be good for you. As a Windows user, I'm not as inclined to run out and buy it. I also think that a school system that uses Windows computers would be much better off with laptops, netbooks, or tablet PCs.

So, that's my take on the Apple iPad. Not really the game changer I'd been hoping for, but a nice device none-the-less.

Let's hear your opinions and thoughts.