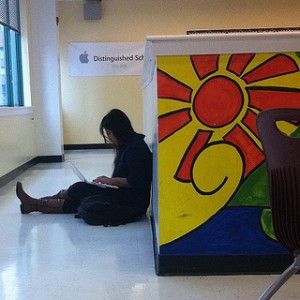 [It's not a bad idea to force yourself to unpack what you mean from time to time. I often say, "Technology must be ubiquitous, necessary and invisible." I thought I'd take a little time to explore each item in that triptych. -- Chris]

Technology must be ubiquitous.

Gregg Betheil of the New York City Department of Education talks about how we don’t send kids to the “pencil lab,” but that is how we treat technology. It sits in a special room or in a special cart, and we wheel it out when we have a specific task we want the kids to do with it.

It must be everywhere. 1:1 can no longer be optional. Today’s world is both analog and digital and in many moments it is both of those things at the same time. It cannot be seen as a luxury to provide students with the digital tools of the modern world. And it is not okay to consider giving children a laptop as something that will preclude other profound instruments of learning. As Gary Stager said at the first EduCon, “We are the richest nation in the world we can provide our children with computer and a cello.”

And once we have provided students with the devices, we must make sure they don’t stay in the backpack. Ubiquitous technology means that they are pulled out in the hallways, they are used in lunchrooms, and they are used in classrooms. When technology is only something that is used when the teacher says so, it remains special, different and therefore not intrinsic to the learning that our kids do.

Chris Lehmann is the founding principal of the Science Leadership Academy, a progressive science and technology high school in Philadelphia, PA. that was recognized by Ladies Home Journal as one of the Ten Most Amazing Schools in the US and was recognized as an Apple Distinguished School in 2009 and 2010. Chris won the Lindback Award for Excellence in Principal Leadership in the School District of Philadelphia in April 2012, and has been honored by the White House as a Champion of Change for his work in education reform. In June 2010, Chris was named as one of the “30 Most Influential People in EdTech” by Technology & Learning Magazine. Read more at his blog, http://practicaltheory.org/blog.