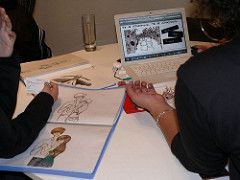 The free eBook I published about a year ago, 60 Web 2.0 Projects, has been very popular, with around 11,000 downloads to date. However, new applications have become available, some of the links in the book no longer work, and new projects have been undertaken. For these reasons I am hoping to update the book and bring out a second edition.

I am not looking for ‘best practice’ as such. The most-valued aspect of the current book is the wealth of ideas it contains. (Teachers, being the creative type, can always adapt the ideas to their own circumstances, such as by making the assignments simpler or harder for a different age group.)

The reason I say this is that many people, especially new teachers, are a bit backward in coming forward when calls for submissions are made, thinking that they have little to contribute. In fact, it is often the case that it’s the newer teachers come up with ideas that more established ones wouldn’t have thought of!

The current edition is still available. In the second edition, I should like to also include information about what barriers there are to implementing Web 2.0 in the classroom, and how people have overcome them; and what people’s favourite Web 2.0 applications are.

If you would like to contribute, you will find an online form for that purpose. It should take you only a few minutes to complete. The deadline is midnight British Summertime on 30 September 2009.

(If you contributed to the first edition, you should have received an email last week.)

If your entry is included in the next edition of the projects book, it will be available to anyone who wants it, on the internet. On that note...

What are the benefits of contributing to this book?

What are the benefits of the book itself?

From what people have told me, and from presentations I've given which use the ebook, I'd suggest the following:

So what makes for an 'interesting' project?

Rather than answer that question directly, I'd like to suggest that what you find interesting and what someone else finds interesting will differ, and will depend on several factors -- not least, what you need to achieve with yoiur students. So my definition of 'interesting' in the context of this ebook is the following:

I hope that you can see from this list of questions that I'm not looking for earth-shattering research here. If your aim was to see if using a wiki could get boys interested in reading, that's fine -- especially if you can cite evidence that it worked (and 'evidence' could be anecodotal, such as what a pupil or her parents said).

I have to declare a bit of a vested interest in undertaking this update now, as opposed to some time in the future. I’ve been invited to give some talks on Web 2.0, so now seems like a good time to update the book. Obviously, I will be mentioning the eBook in my talks, which should lead to people downloading it and, therefore, seeing your contribution.

If you are considering submitting something, but are concerned about whether it is appropriate, just get in touch and ask me. Or simply complete the online form, which will probably take you a similar amount of time anyway.

An earlier version of this story was first published in Computers in Classrooms, along with articles about websites for learning Chinese, using cartoons and comics, using new technology, an ICT skills course for education and much more. Why not sign up for free now!