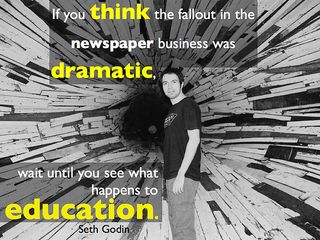 Today I stumbled across a couple of pieces of content that for me, placed at the forefront of my thinking, the real challenges that face education today. First Chris Lehmanngave a presentation to the National Broadband working group at the FCC. Chris began by challenging folks to picture any high school at dismissal time and observe the mad rush for students to turn on their devices, the same devices that are banned in most schools. He argues that the more we continue to ignore the role these devices play in students lives, the less relevant our schools become. These devices will only increase in importance and use as our students become adults.

Later I read Tim Stahmer's post about being careful what you wish for. Tim works in a very large district in the DC area and has long lamented the lack of access his own district provides. In this post he recognized the potential issue of allowing students to use their own devices in schools.

Those of us who are advocates for the potentially transformative effect of instructional technology are often caught up in the day-to-day, never-ending struggle to provide enough equipment, software, training and support to make large scale changes possible.

But sometimes we forget the old adage of "be careful what you wish for".

Because if we ever did get to the point where every student is carrying around their own networked computing device, the traditional education model we've lived with for a century or more would probably fall apart very quickly.

This is largely about losing control. Control which today we want to believe we have but are increasingly seeing it slip away. As I commented on Tim's blog, I work in a district that allows students to use their own devices and has very liberal filtering policies. While it's possible and allowed, very few schools and classrooms currently advocate and encourage students to bring their devices. I have had numerous conversations with principals who are trying to have more content blocked citing them as distractions. The bottom line here is that this is a battle of control. As Marc Pesce writes:

The computer; or, most specifically, the global Internet connected to it; is ultimately disruptive, not just to the classroom learning experience, but to the entire rationale of the classroom, the school, the institution of learning.

There are definitely two sides emerging. Those of us who understand the power of personalized, customized learning and those that are scared to death of what that means to all that they have believed. I don't believe this necessarily is an either or proposition. There are certainly times when we need control and narrow the choices, but those occasions are becoming fewer than they have ever been.

The challenge facing education today is to be able to provide a personalized, meaningful, useful learning experience. For many this remains pie in the sky as their current environments are not even close to being able to consider this due to standardized testing and lack of access to hardware and content. Some, however are opening up the doors to eliminate some of the current barriers. While this may seem like a step forward, it will certainly bring with it new challenges that are likely more difficult to overcome that the ones they just conquered. They better be thinking about Pandora's box. Things just got interesting.