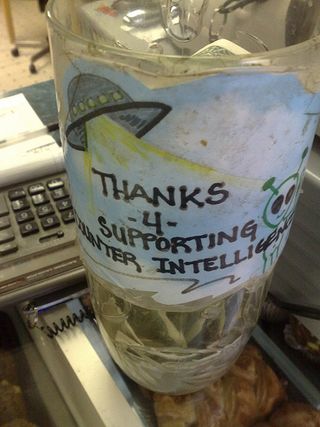 In case you’re unfamiliar with the term, a tip jar is a device whereby people can contribute a donation to a website – a bit like the jars in cafes in which customers can drop a few coins by way of a tip to staff. Indeed, the websites I’ve come across that have tip jars tend to ask visitors to help them buy their next coffee in Starbucks.

Before we can go any further, is this an educational issue? I believe it is, or could be, for the following reasons:

How 'OK' are tip jars on websites? What do your students think? Photo by George Kelly http://www.flickr.com/photos/allaboutgeorge/

I have considered, from time to time, installing a tip jar on the ICT in Education website, but have resisted the temptation so far for three reasons:

I’d be interested to hear of anyone else’s thoughts on these issues.