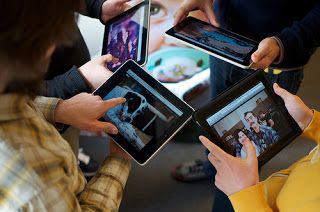 I am probably going to take a lot of heat for this post. But maybe that's a good thing. Perhaps more conversation is needed...

I remember where I was when I heard the iPad announced. I was sitting in my office when I was still working at a school. I had the live blog from Techcrunch on one screen and Twitter on the other. Tweets were flying by with all sorts of comments about the name (both good and bad) and what the device could do. I admit. I had to have one. I was in love. Not long after the announcement I had one and at that time it was all I hoped for. This was going to replace my laptop. I was going to be super productive and only have to carry my iPad.

And I did just that to my first conference. But by the end of the weekend I was frustrated. I couldn't move through programs as fluidly as I hoped. It was a little difficult to take quick notes. I chalked it up to being new and the fact I was still learning.

As time went by my iPad went from being a productivity tool to a consumption tool. Reading blogs and articles, checking Tweets when I was away from a computer and playing games. My 2 year old was the same way. While she wasn't reading blogs or sending Tweets she was learning letters and making matches.

Sure, I thought, there is a real advantage here for a child to learn with with this tool. It's pretty engaging. Its flashy (pardon the pun). And its was around the same time that many schools saw the iPad as "The Device." It happened in my district too. We got several requests less than 3 months out of the box to buy some.

This is a trend that continues to grow and grow and grow. And frankly it's a little frightening to me. A lot of schools have put all their eggs in the iPad basket or hope to put them there. When maybe we should be slowing down and thinking about what we are doing.

No doubt the tablet trend is on the rise and will continue to rise. I have 2 of them. Lots of the folks reading this post might be doing it on a tablet. I forsee a future classroom that has tablets as one tool for kids to use but this jump to replace or forgo purchases of laptops or desktops for tablets instead has me a bit concerned.

I was recently reading over some proposals for a project to give grant money to classrooms. Of the 20 or so I read 18 of them involved wanting iPads. Not tablets, but specifically the iPad. Many were wanting iPads to say they had iPads. What they wanted to do would not have been more enhanced through the use of the iPad and frankly more money could have been spent putting a netbook or even laptop or Chromebook in the hands of more kids than buying a few iPads.

There are lots of great programs out there that demonstrate these devices do have a positive impact on the classroom and learning. Look at Patrick Larkin at Burlington High School or Kelly Tenkely and her school in Colorado. 2 great examples of doing it right. They thought about it, talked about it, investigated it, and most importantly, worked tirelessly on PD so that it works.

And now there is a large push for digital texts because of the release of the iBooks author that will allow anyone to make their own book. I was online for that announcement too and, like the first iPad announcement there were the voices that said this was the ultimate. Finally textbooks are in control of the teacher. (When the first 5 available for sale were from one of the major textbook manufactures in the world.) But, you had to have a Mac, oh and you had to have a pretty recent version of the OS. Oh and you had to have the iPad to get the end product. So the 57,000 students in my district are locked out of those because we don't use Apple products. I can't even build one if I wanted too.

Look, the iPad here is just an example. I am not anti-iPad or anti-Apple. (Quite the contrary. I have written loads of posts and have lots of resources for apps and how to get the most out of these devices for learning.) I think they can do wonders to help engage kids. Like I said, I have seen it with my own daughter. My concern, as it is with any technology is buying something because it is new or flashy or has the perception to make change.

Technology exclusively can't change learning. You can't put 30 iPads (or Chromebooks, laptops, IWB, or whatever type of technology you can think of) in a classroom and in an instant learning gets better. It just does not happen that way. It takes a lot of stepping back, looking at the why's and the how's and deciding on the direction to go. And even before devices hit the hands of kids, there has to be lots and lots and lots of PD on how access to these tools in the classroom changes the way we teach.

Lets just slow down, and think, is buying this the best decision for me? Or for my students?

Steven W. Anderson is the Director of Instructional Technology for the Winston-Salem/Forsyth County Schools in Winston-Salem, NC. He also regularly travels the country talking to schools and districts about the use of Social Media in the classroom. Steven has been recognized with the NOW Award and the 2009 and 2011 Edublogs, Twitterer of The Year Award. In 2012 he was named an ASCD Emerging Leader. Read more at blog.web20classroom.org.