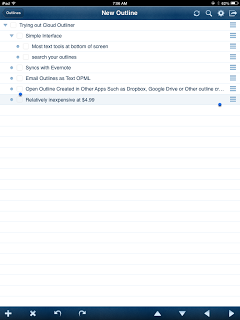 As a former English teacher, I have often believed in the power of outlining as a means to organize thoughts for a project and a presentation, and now, as an administrator there are still many times I use the strategy to organize thoughts or ideas for a school-wide project. Obviously, users could use just about any word-processing app to create outlines, but with the advent of mobile devices, being able to create an outline easily on my iPad or iPhone is a must, and word-processing apps are just a bit too complicated for this activity.

There are, of course, many outliner apps available for mobile device users, but some are as costly as $29.99 and others, while free or less expensive, do not offer all the features one would want in an iOS app. Recently, I downloaded and tried an outliner app called Cloud Outliner, and it has proven to be an inexpensive solution for creating outlines on iOS mobile devices. It basically offers users these advantages:

Creating outlines as an educator and school leader is still an excellent tried and true way to organize school projects and ideas. Cloud Outliner offers users looking for an economical choice an iOS outlining application that is simple to use. For more information, check out "Cloud Outliner in the iTunes Store."