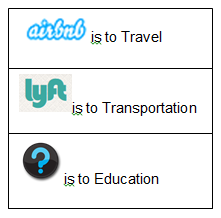 Item #5 in Betty Ray’s article on Edutopia, “5 Awesome Innovations in 2014” sent my mind wandering yesterday, as ideas converged and my imagination soared.

Item # 5 in Betty’s list of innovations is about Airbnb and Lyft – innovations of the travel and transportation industries, that make use of social media and technology to help people find charming and inexpensive places to stay when they travel, and inexpensive and reliable rides when and where they need them. Betty posed the question, “Is there something in this model for educators?”

I thought immediately of an idea I’ve been tossing around in my mind for a while now –a way to build a database of community mentors for our students that would allow them to learn about careers that interest them and form relationships with professional people that might help motivate them to stay in school. My dream would be to contact alumni from our school district to start this ball rolling. Colleges and universities have alumni associations –why not K-12 school districts? Indeed, my school district in St. Louis – Parkway School District – already has a large and successful alumni association. Their primary purpose seems to be to collect funds for schools and scholarships, but what if we expand on that? What if we give choice to our alumni to give time, talent, and/or money? How many different problems could this solve for schools and districts?

Now I am beginning to think that this idea is good, but not big enough. What if we used the same kind of technology and social media connections that Airbnb and Lyft use to build a national – or even international database of potential mentors for students? What if there’s an app for that?

Now my idea is converging with thoughts I am still tossing around from a fascinating discussion with Monika Hardy, who stretched my thinking on how to redefine public education. I’m also thinking about the efforts of Daniel Bassill, and his tutor-mentor connection in Chicago. What if we combine these ideas, using technology and social media in a big way? Imagine this scenario:

Company X is sold on the value of helping build the skills and knowledge of high school students who can learn their business and contribute ideas and solutions while still in school through the “21st Century Apprenticeship Program.” Company X will offer incentives to employees who agree to mentor high school students in X community. John Smith decides to give this a try –his youngest son has just left for college, thanks to the great mentorship he received in the 21st Century Apprenticeship program. His son developed a drive and passion to complete his schooling in a way John didn’t think was possible. John wants to be able to “give back” and help another young person. He accesses the website to compete an application form. Company X will pay for the application fee and background check required. John fills in the form, indicating the high school and universities he attended, the areas he is certificated in, and his personal strengths and interests. He writes a friendly letter of introduction, which is stored along with the data he has entered, and his photo supplied by company X, ready to be sent when the computer algorithm finds a match for him. Once completed, he downloads the app to his phone, which will alert him when a match is made.

Mitchell is having a hard time focusing in school. He knows he needs to do well, and he should be beginning his college search, yet he just has not discovered a career area he is passionate about, let alone any reason to really do well on next week’s Chemistry exam. The stress is really getting to him, between his mom nagging him to study more, his “perfect” brother, who was offered every scholarship under the sun and is now top of his class at his university, and his friends who keep telling him to “blow it off” and go shoot some hoops down at the park. Then, his counselor, Ms. Brown, texted a link out to all the seniors through Naviance. It was about that 21st Century Apprenticeship Program – an app he could download that would allow him to be paired up with a community business mentor based on his interests and strengths. It didn’t cost anything, and it would give him an inside look at some different careers and the world of work. Come to think of it, his brother had this app – he used to spend more time on that than Facebook! He decided to give it a try.

So –what do you think? How will this story end? Will Mitchell go on to be successful? Will Company X be able to tap into new talent and insight, with a new employee fully trained and ready to contribute and innovate upon college graduation? Can we develop this tool?

cross posted at Innovations in Education

Nancy White is the 21st Century Learning & Innovation Specialist for Academy School District 20, providing professional development on 21st century skills and technology integration, and working with the IT-ES team to carry out the district’s 21st Century Learning Plan. Nancy served on an ad-hoc team to help with the integration of 21st century skills into Colorado’s revised content standards, and co-authored The Colorado Learner’s Bill of Rights. Read more at Innovations in Education.