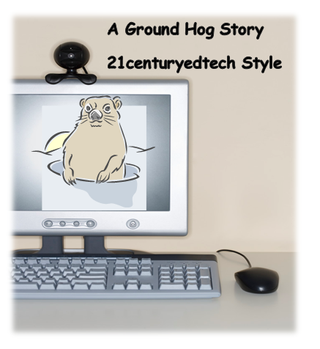 Welcome to my Groundhog Day Posting. This is a true venture into my right brain! You may wonder how I connected groundhogs with 21st Century Learning. It wasn’t easy, but after I found out that Punxsutawney Phil had a Facebook account, I couldn’t resist contacting him. I do have a link to his Facebook below in my closing. Here is what I learned! I hope you enjoy my findings and please give me a follow on Twitterhttp://www.twitter.com/mjgormans), I am sure Punxsutawney Phil will! . Have a great Ground Hogs Week! – Mike

Free Webinar – Please join me on Tuesday, Feb 4 at 6 PM for a very special free PBS Learning Media Webinar entitled, Be Inspired, Be An Innovator. It will be a great addition to your Digital Learning Day, Week, or Month. Click this link to register! Also check out a future post giving you a gold mine of resources for STEAM Education! You will want to share!

It is that time of year when Punxsutawney Phil emerges from his temporary burrow which is a simulated tree stump at the rural site of Gobbler’s Knob in Punxsutawney, Pennsylvania. Once again he will look for his shadow and then speak in Groundhogese, giving the weather forecast for the next six weeks. Or so the story goes… I recently had the opportunity to contact Punxsutawney Phil using his Facebook account and he gives a different side of the story. One that he says is much more reliable and has perhaps been misinterpreted due to poor translation of his Groundhogese. My updated version of Google Language Converter translating Groundhogese to English gives an interesting and possibly more accurate account.

Many years ago according to Punxsutawney Phil there emerged a theory that the earth was becoming flat. This theory networked throughout the groundhog community since their tunnels and burrows allowed for word of mouth communication to spread throughout the groundhog world. The thought of the earth becoming flat alarmed the groundhogs due to the changes it would bring to their vast array of tunnels. The earth changing from a curved surface to a linear flat surface would change their way of life and the very way they traded and worked with groundhogs of different parts of the world.

This realization caused a massive change in the groundhog educational system. A national program called NGLB (No Groundhog Left Behind) was drastically changed and reformed. You might say it turned into a new program called ”A Race To The Top”. Something most groundhogs were familiar with if, they wanted to see daylight! Rather than memorizing groundhog history and standards, young groundhogs were asked to plan for a future they had not envisioned yet. The groundhog students learned to problem solve, work cooperatively, research, and use high order thinking. The transformation led to an era of creativity and higher order thinking. Groundhogs were soon using both their right and left brain “A Whole New Mind”. It was during one of young Punxsutawney Phil’s Project Based Lessons in school that the very first Ground Hog Day came to be.

It was long before the internet, so Phil had collaborated with other student groundhogs across the miles. They decided that once a week in the summer they would go outside their boroughs and calculate a mathematical triangulation of the sun and their shadow. By calculating the changes in their shadows they could then figure out if the earth really was becoming flat. To be more accurate, they picked one day each winter do the same. Of course they were certain to collaborate, and all did their experiment on the same day, which ended up being February 2. The groundhogs realized that due to cloud cover not all would see their shadow, but were hopeful that enough would, which would render their data reliable. As time went on, this practice became a lifelong learning experience.

The groundhogs discovered two things from their experiment. First, the earth was not becoming flat in a physical way but in a virtual way. This flattening sensation involved the way groundhogs connected and worked with one another throughout the world. Even more interesting, an unintended consequence had also been discovered. The Feb 2 Groundhog Day of experimentation and analysis was getting attention from humans. Word spread across the groundhog world. The advent of the internet and technology allowed groundhogs both young and old to communicate through email and twitter about this human curiosity. The groundhogs were surprised to learn that the humans thought their mathematical triangulation of sun, earth, and shadow was a weather prediction. The groundhogs were amused but understood after studying the ways of the human school system. They found the human child had no time to inquire, apply, and synthesize due to the vast amount of facts that humans held important. There was no time in the human curriculum to prepare for future needs, the past and its traditions were much too sacred.

Punxsutawney Phil told me that he looks forward to every Feb 2 and is constantly reminded how his personal learning community, which started when he was young, discovered the real meaning of a Flat Earth. He also pointed out that as an added extra to the day, it gives all groundhogs an excellent opportunity to get a glimpse of the human race. As Phil stated, “I often wonder what shadow of a thought those humans may be reflecting on”. He also let related that if you wish to know the weather, at least for the next ten days, the Weather Channel does a pretty good job! If you really want six weeks, then check out the Groundhog Network!

Michael Gorman oversees one-to-one laptop programs and digital professional development for Southwest Allen County Schools near Fort Wayne, Indiana. He is a consultant for Discovery Education, ISTE, My Big Campus, and November Learning and is on the National Faculty for The Buck Institute for Education. His awards include district Teacher of the Year, Indiana STEM Educator of the Year and Microsoft’s 365 Global Education Hero. Read more at 21centuryedtech.wordpress.com.