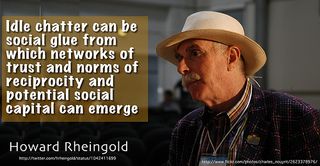 When I first started using Twitter 7 years ago, it was largely viewed as a frivolous space of drivel. For many it still is and I’d be the first to admit much of the time spent there is exactly that and I’m as much of a contributor to that as any. And yet….

For a long time I viewed Twitter as a throw away tool, conversations and streams of consciousness that wasn’t worth saving. As time evolved I found myself searching through past tweets to recall a salient thought, link or idea that would often lead to deeper thinking. I’m still amazed at how many times I remember a tweet that is several years old and thinking about what may have transpired in my thinking as a result. These tiny documentations of life and ideas are much more meaningful than I would have ever expected 7 years ago. You would think after accumulating over 80,000 tweets that once in a while, there’d be something useful there.

There were a few tools that sort of helped make this easier but most were clunky and unable to find tweets that were more than a few days old. About a year ago, Twitter made everyone’s archives available. This is nice but not particularly useful in this form. This is why I’m glad I know smart people.

Starting with Martin Hawskey and then Alan Levine they developed a way to easily access your Twitter archive and search for those conversations and ideas previously lost somewhere in the Internets. I use this tool pretty regularly and it works wonderfully. People regularly ask me how I have access to all my tweets and this is how. There’s a little geekiness involved here but the way Alan and Martin lay it out, makes even someone like me able to make it work. I’ve made my Twitter archive public and update it each time I do a search. I think there’s something important about having access to your data.

Dean Shareski is a Digital Learning Consultant with the Prairie South School Division in Moose Jaw, SK, Canada, specializing in the use of technology in the classroom. He lectures for the University of Regina and is the Community Manager of the Canadian DEN or Discovery Educators Network.