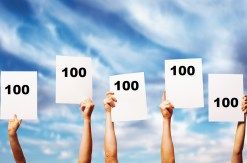 I have a serious problem with the way we teach, assign, and grade student writing. I’ve always wanted to change my system, but could never come up with something I liked. Nothing felt right.

Earlier this year, I was invited to present at Techspo on Gamificaiton. There, I took the opportunity to sit in on a bunch of workshops. One workshop, in particular, caught my attention. It was called “Stop Bleeding Red Ink” hosted by the amazing Kate Baker.

During the workshop, she talked about the many awesome ways that she tackles student writing and grading in her class. I took a lot of great ideas away from the workshop, but one really caught my attention: she allows her students to grade each other and, if students agree on the grade given by their peer, puts it into the gradebook as the final grade.

Mind = Blown. This is what I’ve been missing.

I loved the idea. Immediately, I wanted to create a whole new writing system around it, but I was skeptical. Could I really trust my students to grade each other? I chased Kate down after the workshop and talked to her about it. Long story short: she assured me her students were fair in their grading, and I should try it for myself.

Inspired by Kate Baker and these studies I created my own Peer-Graded Mastery system.

I was still worried when I proposed the idea to my students. Would it work? Would they take it seriously? I was worried how their parents would feel when they found out. Would administration back me if and when they found out (Ask for forgiveness!)?

In February, I told students that, for the rest of the year, we would be instituting a better writing system: a Peer-Graded Mastery system. I told them that they would have a due date as usual, but on the due date their paper would go to a random peer to grade using a rubric, not me. If they agreed with the grade they received from their peer, it would go into the gradebook as the final grade. If they did not agree with their grade, they could redo it and choose to have it regraded by the same scorer, a new scorer, or myself. I told them they could redo and resubmit essays as many times as they wanted until they earned the grade they wanted. At the end of the process, they will fill out an evaluation that rates their scorer. At the end, everyone will get two grades: their final essay grade and a scorer grade.

“Wait, so we can redo and resubmit our essay until we get the grade that we want?” Yes.

“You’re not grading our papers anymore?” Not until the second round and only if you want me to. You’ve been with me long enough to know what good writing is, what I expect in an essay, and what I consider to be “A” writing. I’ve read enough of your writing to know you’re all talented. I’ll still be looking over shoulders, but we’re at the point where you’ll learn more from this process than me grading you.

“What if the kid who grades my paper hates me and gives me a zero?” Then you reject their grade, give the unfair scorer a poor evaluation, and request a new scorer or that I grade your paper.

“What if we just give each other hundreds?”

There it was! The same question I had. I hit them with my answer that I had practiced all night in anticipation:

Then I guess you get a hundred. “Really?” Really. Look, writing is a process. Writing is never done, it’s just done for now. Any job you get, you’re going to be writing. Don’t you want to be good at it? Why give each other hundreds if you can redo and resubmit your essay until you earn the grade you want, earn a grade that you’re proud of? If you want to abuse the system, go ahead. Every system has “those people,” but if you care about your future, if you care about getting better, improving, then I know you’ll do the right thing. I trust you guys. You won’t let me down. Besides, life has a way of sorting “those people” out.

I handed out a copy of the rubric they would be using to peer-grade, went over it, and told them to go home and self-grade their essays before the due date, which was a week away.

We’ve used my Peer-Graded Mastery system for two essays now. How does their peer-grading stack up against when I graded their essays? Can I trust them to grade each other fairly?

The first four essays I graded this year:

The last two peer-graded essays. Note: this is before anyone was allowed to redo and resubmit. These are the very first grades they were given by their peers.

For the first essay they peer-graded, I went through and read every single essay and looked at every single rubric. Overwhelmingly, the rubrics were well done and the papers were well graded. Of the 71 papers I went back through, I found 8 papers that I thought were graded too easily by about 15-20 points. I found 4 papers that I thought were graded way too harshly, again, by about 15-20 points. For the other 59 papers, I felt my grade would have been within +/-5pts of the grade they were given by their peer.

In both instances, all of the students who felt they were graded too harshly resubmitted their essay for regrading. Interesting: 7 kids felt their scorer was too easy on them and asked to be graded again. More interesting: 3 of the 7 students who felt that they got an inflated grade were not one of the ones that I had identified as being grade too easily. Some of my kids were being harder on themselves than I had been.

How did students feel about this process after their first time using it? How did they feel their scorer did?

The data from the second time they peer-graded their essay shows a general improvement on the quality of their scorer and their overall feelings toward the process.

I’m thrilled with how my Peer-Graded Mastery system has turned out. I’m glad I took the risk, and I am proud to see I can trust my students to grade each other fairly and honestly.

Next time, I’ll show you how the whole system works, so you can implement or modify it for your class. I’ll also talk about some ways I plan on improving it for next year. For now, the good news is our students are trust worthy.

*Funny Story: Kate Baker teaches in the district next to mine. She’s literally ten minutes down the road and I had no idea! Unfortunately, we didn’t know of each other before Techspo, but we’ve been talking ever since. What a small world!*