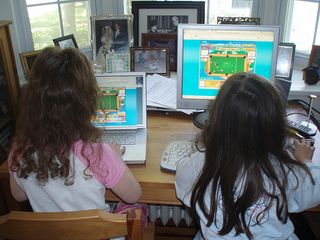 I thought it would be interesting to dig out my scheme of work for Information Technology – as it was then then – from 1997. It was based on the Informatics scheme of work published by the now defunct organisation Acitt. Acitt was a subject association for ICT Co-ordinators. I helped to shape the Acitt scheme of work, but the one I used myself was a variation, adjusted to meet the circumstances pertaining to my school. I’ve reproduced it below.

It’s difficult to tell what skills each unit addressed, because they were centred on problem-solving and were organised as projects. We adopted a model based on Bruner’s Spiral Curriculum, by which concepts are introduced at increasing levels of complexity throughout the course.

By the time we get to Year 8 (13 years old), projects take almost a whole term (10-12 weeks) instead of only half a term apart from a revision period for the first few weeks. By Year 10 (15 years old), they each take a whole term, reflecting the greater depth and breadth we expected from students by that age.

One project – Traffic lights and Pelican crossings –fairly obviously involved programming, data-logging and control. But less obviously, a number of other projects also involved those elements – or could do if the student decided it was appropriate. For example, Parties and Presents involved “What if” scenarios that could be tackled via spreadsheet functions or Visual Basic for Applications, while the Library project invited students to cogitate and speculate on how a library of the future might look. Interestingly, many of the students’ predictions, such as automated notifications and delivery to your home computer, have since become commonplace.

You will notice that most of the topics are covered by each year group. That is because we introduced the new scheme of work to every year group at once. Once the scheme had been running for a year, students who had already covered a particular topic were either given a new one, or expected to revisit the topic in greater depth. The reasons for introducing the scheme to everyone at the same time were partly to reduce teacher workload – it’s hard to juggle two or more different schemes of work simultaneously – and partly – mostly, in fact – because the existing schemes of work being taught were not very good in my opinion. They were unchallenging, and therefore boring. Students can’t be hoodwinked: one of them described one such course as “Mickey Mouse”, and I agreed.

I’m not sure I would change an awful lot were I to introduce a scheme like this today. I would certainly give it a facelift, by changing the Record Shop to Music Streaming or something like that, but as the scheme was problem-based and involved project-based learning, I’d be more than happy to dust it off and put it back into active service.

Here's the scheme. You will need to look at the original I think unless you have phenomenal eyesight:

One final thing. You will notice that all it contains is a list of Project titles. So where did the detail come from? I’ll explore that question next time.