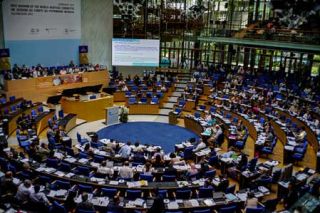 In my last post I suggested 6 reasons to have an e-learning committee in a school. But not everything in the garden is rosy. Based on my experience as ICT co-ordinator in several secondary (high) schools, here are what I see as the downsides.

Maybe I have been rather unlucky, but I have found that some subjects want to be represented on the e-learning committee purely in the hope of getting extra money to spend. I even experienced one meeting in which one of the teachers said that if I wasn’t earning such a high salary there would be more money to spend on technology. I have no idea how he knew, or thought he knew, what I was earning, but I told him that as I hadn’t determined my own salary level he should take his complaint to the headteacher. I can deal with such crass statements, but spending an hour a week (or whatever) in the company of such people is not exactly pleasant. Fortunately, not everyone on the committee was so bold in stating what they were really there for; if they had been, I’d have probably disbanded the committee on the grounds that its members had lost the plot, as we say in England. The purpose of the committee was to discuss whole school issues, not to try and grab resources or take pot shots at the Chair!