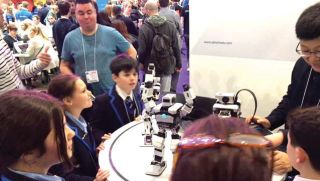 Each year in January, London hosts the edtech extravaganza known as Bett. Like a mini ISTE, it’s huge, vibrant, exciting, exhausting and, to an extent, disappointing.

What do the 40,000 visitors from around the world find when they arrive? They find dozens of free seminars and keynote talks, several hundred exhibitors, and many special events outside of the official program, including seminars run by Microsoft and Google and debates hosted by Smart. A government official opens the event, and this year it was announced that around $118 million will be made available over the next five years for training teachers and setting up a National Computing Center.

Another feature of Bett is the Bett Awards, a black-tie event that celebrates achievement in categories such as best technical support, best educational apps, and so on.

4 THEMES FROM THIS YEAR’S SHOW

1. Robots. The sheer number of robots of various shapes and sizes was striking. The most compelling of these is one designed to help people—either emotionally or by performing tasks. The MiRo responds to people and the environment. The neuroscience underlying its design, which can be found on the website, is fascinating. An Oslo-based start-up called No Isolation showcased AV1, a telepresence robot designed to enable children with long-term illness stay connected with their friends and studies and attend school remotely.
2. Coding. Although several new “solutions” made an appearance, a few seemed merely to add another layer of complexity onto the subject.
3. Virtual reality. I explore VR headsets, such as Microsoft’s Hololens, in an article about robots and artificial intelligence.
4. The GDPR. The General Data Protection Regulation comes into force in the UK on May 18th. It could affect US companies in that British customers will only be allowed to use GDPR-compliant companies for anything in which personal data is involved, like mailing lists (even IP addresses count as personal data under the new legislation).

Trade shows and conferences offer opportunities to catch up with old friends, to meet new ones, and to network, and Bett is no exception. It’s also exciting to be in an environment in which thousands of people who are interested in education and edtech come together to explore, listen, and debate. While it was disappointing that some of the so-called “solutions” seemed to have no pedagogical basis whatsoever, but were solutions looking for a problem, I’ll be back at Bett next year, January 23–26, 2019.

In the meantime, have a look at Ed Tech Predictions 2018 to see what some of the exhibitors at Bett think is on the edtech horizon and what the challenges will be.

Terry Freedman is an independent edtech consultant and freelance writer based in London, England. He publishes the ICT & Computing in Education website.