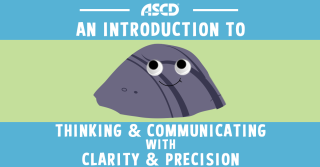 I don’t like to brag but I think I invented stone washed jeans! I know, I know, what has this got to do with the Habits of Mind? Bear with me as I explain. I grew up on a farm in southeastern Nebraska and one of my favorite things to do was to pick up rocks. My Mom had a one pound coffee can sitting on the dryer to collect whatever she found in my jeans and sometimes she missed some. As I said, I invented stone washing!

After reading that introduction, it may not be surprising to you that I have a massive rock collection. And okay, maybe the stone washing story wasn’t the best segue to explaining how I’ve taught my students the habit of mind you see in the title: Thinking and Communicating with Clarity and Precision. However, I did have a class-sized collection of rocks assembled for the following activity.

The collection was comprised of twenty-four rocks of approximately the same baseball-like size, with various textures, grains, angularity, and color. I used a paint marker to number each rock 1 through 24 and had the rocks sitting at the table in the front of the room in numeric order. I then had each student draw a numbered card from a deck to select “their” rock.

At this point I explained that we were working on Thinking and Communicating with Clarity and Precision, an important Habit of Mind. We discussed what both clarity and precision meant and listed some examples of what might be used to describe their specific rock. Obviously, “it is hard”, isn’t of much use in narrowing down the selection!

Students obtained their rocks, took them back to their seats and recorded the number of the rock they had on a piece of paper. The assignment was to describe their rock in their own words, as accurately as possible. As the students wrapped up their descriptions, I collected them and had the students return their rocks to the front table.

I scrambled the papers together and then read them aloud to the entire class and asked the students to try to match the written description to the correct rock with the stipulation that they could not identify their own rock! It was agonizing but definitely eye opening for my students.

As teachers, we must be masters of communicating with clarity and precision! If you do any curriculum writing you know how precise directions need to be for students to accomplish the task you are asking them to complete. Or test writing for that matter! Oh, test writing. If there were ever a situation that demanded clarity, that would be it.

We depend intimately upon precise and clear thinking and communicating in all levels of education and daily life. If you don’t do a good job of describing the noise your car is making, it will be difficult for the mechanic to diagnose the problem; especially if he can’t get it to make the noise again. Your physician counts on you to relay your symptoms clearly at a doctors’ visit so that you can receive proper care. Students often complain about “big words”, but these words are often the most precise for the situation they’re describing. More precision leads to more clarity. More clarity helps students to better understand each other and the world.

Bob Feurer spent 37 years teaching 7-12 science and coaching three sports at North Bend Central P.S. in North Bend, NE. He retired from the classroom and has been elected to the local school board. He considers himself as a blue color habits of mind practitioner as he is self-taught after reading Habits of Mind Across the Curriculum and Learning and Leading with Habits of Mind. He recently received his certification as a HOM professional developer. Feurer is a third-generation teacher and his daughter the fourth. He was the 2011 Nebraska Teacher of the Year.