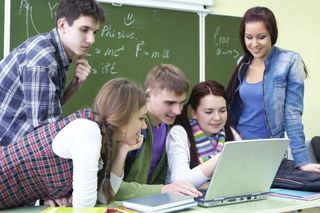 At a CTO summit this summer, I joined a group of educators discussing the effect of spatial design and furniture selection on learning. It was clear that attempts to influence learning by changes to spaces and furniture had not always met with success. One tech director described how the new flexible furniture was still being arranged in the same uniform rows as the old table-arm desks. He was frustrated that the time and effort to remodel the space appeared to have been wasted.

The facilitator in the CTO discussion, Maureen Miller, has not yet had the opportunity to fully renovate all classrooms at Winnetka School District 39, in Illinois (the District is just completing an educational facilities master plan). However, her district was successful in encouraging students and teachers to innovate and modify their current spaces. The district has given away design grants for teachers to modify their spaces and furniture. Maureen shared that teachers have implemented improvements like flexible furniture and marker boards on horizontal rails, to enable the existing spaces to be more adaptable.

When I visited this Maureen’s district a few years back, there was a sense of excitement from students. I saw examples of students energetically attacking unstructured problems and taking ownership in their learning assignments. Two of her students recently served as panelists at Tech and Learning Live Chicago.

A school renovation project I was involved in underscores the role of spatial design in supporting instructional practice. In addition to my District CIO role at a past school district, I was also the building committee co-chair for a complete high school renovation.

As the building design team grappled with the possibilities for technology, furniture and spatial layout of classrooms, we decided to create prototypical classrooms. Teachers could sign up and use the prototypical classrooms, have their classes experiment with audio-visual technology, and try out student desks, student chairs and teacher furniture. They could also check out a breakout room for small-group discussion.

Student and teacher feedback influenced the selection of student desks, chairs and the teacher’s station. The labs also helped the design team to refine the materials for the room, ultimately settling on full-height marker surface on two walls, and tackable surface on a third wall.

Earlier this spring, I toured the renovated high school, about 6 years after it was completed. I saw students working individually and in groups, in breakout rooms, in hallways, and throughout the classrooms. The math department chair told me about students working out math problems on every available writing surface, including desks, the marker surfaces, and even on windows.

My site tour showed a school where spatial design, technology and furniture combined to enhance individualized student learning. What made this deployment successful when others in my summer discussion were still looking for results? From my experiences in this district, I know that individualized student learning was already taking place before the renovation. In discussing this question with the math department chair, he remarked that the push for individualized learning was really driven by the classroom teachers, with leadership by department heads, and strong support from curriculum and administration. Classroom teachers were ready for the renovation because they had already been planting the seed of innovative instruction in the existing high school.

Winston Churchill said, “we shape our buildings and afterward they shape us.” However, Churchill was referring to how to rebuild the House of Commons, which had been badly bombed at the end of the Battle of Britain, during World War II. He worried that if the shape of the House of Commons were changed by expansion, it would change the look and feel of the proceedings there. He was not trying to create a new type of behavior. In his mind, the crowded, intimate setting of the House of Commons meeting room encouraged the kind of healthy debate that was already taking place there. He felt that debate was essential to Great Britain’s democratic process and should be sustained.

In the same way, I think the redesigned high school I visited was encouraging the type of healthy instruction that was already taking place there. A new school design would not necessarily have led to new instructional methods, but the new design did make it easier for teachers to allow students to flourish.

Wherever you are at in the design and renovation process, I encourage you to develop a wholistic approach to your thinking about the elements of technology, furniture and spatial design. Start with your instructional direction, then use of all three elements to foster the type of instruction your district desires. While these elements by themselves will not generate changes in instructional practice, they will certainly provide the soil to nurture best-practice instruction, to the ultimate benefit of your students.

Craig Williams has 30 years of experience working with schools, focused primarily on providing visionary consulting and support. A former school CIO, Craig emphasizes pragmatic improvement in all areas of IT, from internal infrastructure, to effective instructional software and public-facing technologies. He is the Director of Infrastructure Consulting Services for Client First Consulting Group (www.clientfirstcg.com).