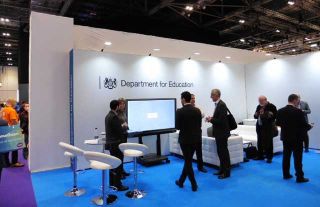 Each year in January London sees the arrival of the ed tech extravaganza known as Bett. Like a mini-ISTE, according to Tech & Learning's very own Kevin Hogan, it's everything you would expect: huge, vibrant, exciting, exhausting and, to an extent, disappointing.

The name Bett used to stand for something – British Educational Training and Technology, I think – but now it's just called 'Bett', hence the absence of capital letters.

Over the four days of the show, somewhere around 40,000 visitors from all over the world pass through its doors. What do they find when they arrive?

First, they will note the dozens of free seminars and keynote talks. Some are aimed at teachers, others at school leaders. The teachers' sessions are themselves divided into elementary school, high school, and post-16.

Secondly, they will be overwhelmed by the number of exhibitors – several hundred of them, in fact.

Finally, they will discover many special events outside of the official program. For example, seminars run by Microsoft and Google, and debates hosted by Smart. Indeed, for several years, though not this year, Tech and Learning itself has put on a well-received panel discussion looking at the main concerns of the moment. One year, for instance, the focus was on the question: how do we bridge the digital divide?

Another feature of Bett, which was missing for several years but is back now, is the opening of the event by a Government minister along with, we hope, an announcement of further funding. This year we learnt that 84m GBP, or around $118m, was being made available over the next five years for training teachers of computing and setting up a National Computing Center.

The Government is not the only one that uses Bett for announcements. Companies use it for product launches (both Microsoft and Google unveiled some exciting developments this year), as do other organisations. This year, for example, a new organisation called EDUCATE was officially launched, its aim being to help ed tech start-ups undertake and benefit from research. Educate is a partnership involving the British Educational Suppliers Association, a key player in the organisation of Bett itself, and University College London.

Another feature of Bett is the Bett Awards, in which companies in various categories (such as best technical support, best educational apps and so on). These are dished out at a black tie event which celebrates achievement.

What were the themes this year?

If I had to pick out just four themes from this year's show I'd say the following. Before I do so I'll preface it by suggesting that while there are many tried, tested and established brands at Bett, there are also many offerings which seem to me to be proofs of concept.

The first thing that struck me was the sheer number of robots of various shapes and sizes. The most compelling of these was one which was not there to help kids learn robotics as to help people, either on an emotional level or by performing tasks. The MiRo, as it's called, responds to people and the environment. Stroke it, for example, and it starts wagging its tail. It's worth reading the website for details of the neuroscience underlying its design.

Another robot was from an Oslo-based start-up, No Isolation, which showcased AV1, a telepresence robot, designed to enable children with long term illness stay connected with their friends and studies, and attend school remotely. See Robots are invading your kid's classroom.

Another theme, as usual, was 'coding', with several new 'solutions' making their appearance. I use quotation marks because a few I saw seemed merely to add another layer of complexity onto the subject. I am not sure why we need any more variations of Scratch, Python or, to be a little retro, Logo.

The third theme was virtual reality, using VR headsets, such as Microsoft's Hololens, which I explored in an article about robots and artificial intelligence.

The final theme I noted was a lot of information and talks about the GDPR – the General Data Protection Regulation. This comes into force on May 18th in the UK, and before you race on to the next paragraph on the grounds that it has nothing to do with you, hold on. The way it could affect US companies is that we Brits will only be allowed to use GDPR-compliant companies for anything in which personal data is involved, like mailing lists. (In fact, even IP addresses count as personal data under the new legislation.)

What was good about the show?

One thing that is consistently good about Bett is meeting up with old friends, and the opportunity to meet new ones. Indeed, I read an article recently which suggested that the only reason to attend a trade show or conference was in order to network! A trifle cynical perhaps, but one can see the author's point!

Another thing was, as you might expect, the buzz. There is something truly exciting about being in an environment in which thousands of people who are interested in education and interested in ed tech come together to explore, listen, debate.

What was not so good?

A couple things were disappointing. One was the absence of a few big names on the British education scene. There was a feeling of loss. Another was that some of the so-called 'solutions' seemed to have no pedagogical basis whatsoever, but were solutions looking for a problem.

I guess when it comes to ed tech, it was ever thus.

Despite those small disappointments, I'll be back at Bett next year, as will Tech and Learning. So if you want to join us, here's the date for your diary: 23-26th January 2019.

In the meantime, have a look at Ed Tech Predictions 2018 to see what some of the exhibitors at Bett think is on the ed tech horizon, and what the challenges are.

Terry Freedman is an independent ed tech consultant and freelance writer based in London, England. He publishes the ICT & Computing in Education website.