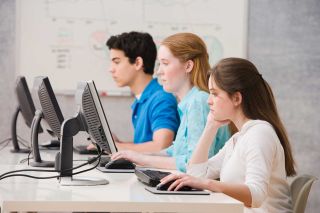 There is much to be said for using programs or other resources in ways that had not been intended when they were devised. It’s surprising what you can achieve if you’re prepared to stand back and decide not to accept what the suppliers have decided is its purpose. Here are a couple of examples.

When I first started teaching my subject was Economics. One of my classes was for the ‘A’ (Advanced) Level, an important examination because it acted (and still does) as an entry ticket to university. It was Year 1 of a two year course, and we had two one hour lessons per week.

I decided to use one of those lessons each week to play a game called Stockpiler. This involved dividing the students into small groups, giving each group a budget, and telling them to ‘buy’ stocks and shares.

Each week they would make their decisions, and I would collect them, post them to a computing center, and then a few days later we’d receive a print-out of the results. Then we’d do it all again the following week.

The ostensible point of all this activity was to learn how the stock exchange works, which could be taught in one sentence:

The Stock Exchange is like a casino, except that the value of stocks and shares depends not on luck, and not even on what you think they are worth, but on what you think most people think they’re worth. So if you’re going to buy shares, you need to try and second guess what everyone else will think is a good company to invest in, or to stop investing in.

There: I’ve taught in in 30 seconds, so why all that fuss and bother? Not only that, it was very rare for a question on the Stock Exchange to come up in the examination, and nothing we did in that Stockpiler game would have helped them much with if it had.

The answer lies in the other things the students were learning:

Not a bad return for an investment of an hour a week! Most if not all of those skills were useful in other parts of the course. For example, at that time one part of the exam consisted of presenting tables and graphs to the students and asking them to identify what was going on. Winning or losing pretend money was, in this scenario, merely the by-product of a much larger experience. And proof that the students liked it? Would they have been prepared to wait a week for the results of their decisions if they hadn’t?

Another approach I tried was getting the students to play a computer game called Running the British Economy. It was based on the model used by the Treasury at the time, and the aim was to show how concepts like the multiplier worked. Basically, if the Government tried to get more people into work by commissioning new roads, road building companies would hire more workers, those workers would get paid and spend their money in stores, so storekeepers would have to buy more stock and hire more shop assistants, and so on. In other words, the amount of the original injection of Government money would be ‘multiplied’ several times over.

The aim of the game was to get a good balance between price levels (inflation) and employment. But I decided we should push the game to its extremes.

“See what happens if you go for zero inflation”, I told the class. They did so, and watched in horror as the game years rolled on, showing a rise in unemployment to a level of 98%, with the predictable result that there were riots and the Government was kicked out.

“OK”, I said. “That didn’t work out too well. See what happens if you go for zero unemployment instead.”

The result was inflation of around 700% a year after just a few game years. In that situation, you might need a wheelbarrow to carry around enough money to buy a loaf of bread — and risk being mugged for the wheelbarrow, not the money.

So this was all a complete failure, right? And I was a rotten teacher. On the contrary: I used those outcomes to get the students to examine why those results occurred. They came to the (correct) conclusion that it was all down to the underlying, ie hidden, assumptions that the Treasury had built into the model. The Treasury had adopted one economic perspective and treated it as a statement of fact rather than a theory.

Having realised that, the students could then apply critical questioning to other predictions and statistics they came across. A report from a think tank predicting doom and gloom? What are their hidden assumptions? What is their underlying model? Would we get a different result from the same basic facts if we used a different set of assumptions?

All very valuable questions for the study of Economics.

And perhaps for living in general.

Terry Freedman is a freelance writer, author and trainer. He publishes the ICT & Computing website and Digital Education newsletter.